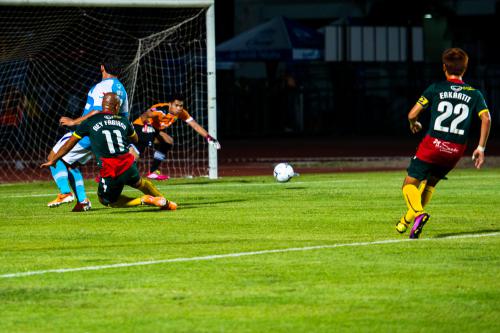 PHUKET: Yesterday was the first fixture of the Yamaha League One season and fans saw a spirited bout between Phuket FC and Pattaya United FC, who were relegated from the Thai Premier League this year, resulting in a 1-0 final score that secured victory for the Ronins.

As the sun went to sleep, the crowd woke up, with about 4,000 fans making it out to Surakul Stadium to cheer on the Ronins. The volume from the stands was high and surely some enthusiastic fans were struggling with hoarse voices following the game.

The first half went scoreless, but not for lack of trying, as the Ronins gave the goal posts a pounding and forced Pattaya goal keeper Hassachai Sankla to earn his keep. Although possession was largely in Pattaya’s favor, Phuket’s persistent defense prevented any serious scoring attempts. However, it was a different story when Phuket got control of the ball in front of Pattaya’s goal, making several attacks on the goal to keep the crowd in suspense.

The pace picked up after half-time with neither team wanting to see the same blank scoreboard at the end of the second half. It came about halfway through the second half as midfielder and Vice Captain Eakartit Somjit outmaneuvered a defender to sneak the ball over to striker Ney Fabiano. In the ensuing mayhem as Fabiano struggled to get control of the ball, Pattaya goal keeper Hassachai Sankla was lured out of the goal area, and when Pattaya defender Robert Pishinin Mendes lost a collision with Fabiano, the deal was sealed.

Pattaya made a couple more cracks at goal but it was apparent throughout the match that nothing was going to get by the Ronin’s rock-solid goal keeper Adisak Duangsri. Phuket defender Yusuke Sato came frustratingly close to glory with a strong shot deflected off the crossbar.

Everyone was aware of what Phuket Coach Stefano “Teco” Cugurra confirmed after the game, “If we would have had a little bit better of a finish in the first half, I think we should have been two or three points in front of them, but one to zero against a [former Thai] Premier League team – we are happy.”

When asked if it was the outcome that he expected Cugurra said, “Yes, because we had good preparation, we had a good preseason, we have 17 new players… so we were confident.”

Everyone is eager to see if the Ronins’ confidence holds as they take on Sisaket FC in the first round of the Toyota League Cup on March 1 at Surakul Stadium. The game starts at 6:30pm.