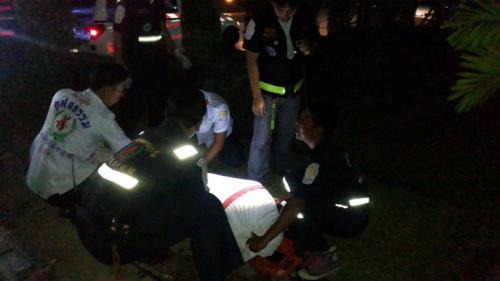 PHUKET: A 27-year-old Ukrainian man died early yesterday morning after attempting to climb from a fifth-floor balcony of a Phuket Town condo to his home on the fourth floor.

Phuket City Police were notified of the incident by the building’s security guard at 1:10am and rushed to the scene with Kusoldharm Rescue workers.

“We found the body of Oler Volkov on the ground outside Phanason Green Place Condo in Rassada with a broken neck, ankle and broken arms,” Kraisorn Park-Aree of the Phuket City Police said.

Eyewitnesses informed police that Mr Volkov lived on the fourth floor with his Thai girlfriend. The couple allegedly went out yesterday evening to drink with friends on the ground floor. When Mr Volkov returned to the room, he found that his keys were locked inside, Lt Kraisorn explained.

“We checked CCTV footage, which showed Mr Volkov returning to the room at 1am. However, he was unable to open the door,” Phuket City Police Superintendent Sermphan Sirikong said.

“Mr Volkov accessed a room on the fifth floor to climb down to his balcony on the fourth floor. While he was climbing down, he lost control and fell to the ground,” Col Sermphan said.

The body was found with a mobile phone and a knife, Lt Kraisorn added.

Police are continuing to investigate the details of the incident.