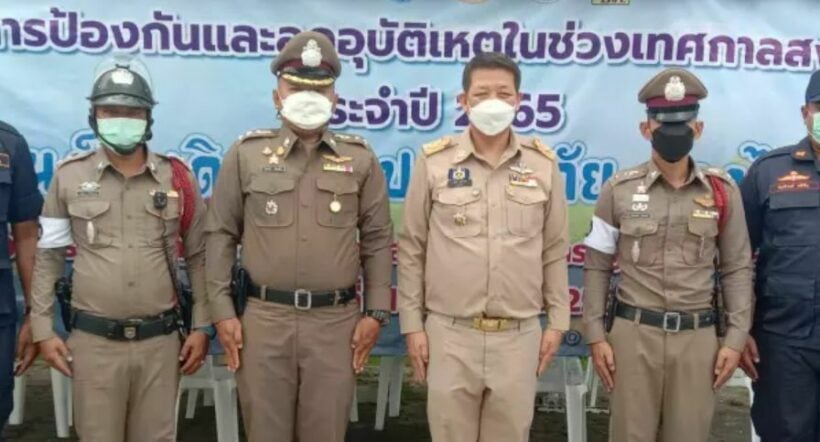 The Songkran holidays, or the Thai New Year, is a time notorious for road accidents all over Thailand. During the long holiday, drunk driving increases and road accidents are even more common than usual on Thailand’s dangerous roads. Phuket police officers have set up 11 checkpoints around the island to catch anyone drunk driving or driving dangerously and to help anyone in need.

Phuket police will operate 11 main checkpoints, three secondary checkpoints and ten service points according to the island’s road accident prevention and reduction plan for one week from April 11-17 to cover the Songkran holidays.

Police from Muang Phuket Police Station and public health officials jointly set up a checkpoint on Thepkrasatree road in front of Muang Mai Building which will act as the main checkpoint for Phuket town.

During the Songkran holidays last year, over 277 people died in car accidents in Thailand and a further 2,357 were injured. Drunk driving was involved in over one third of the accidents.

The checkpoints have been set up as part of Phuket Governor Narong Woonsiew’s pre-Songkran road safety campaign. Narong’s goal is to have zero casualties during the holiday.

If you’re planning on drinking this Songkran, get a taxi!

Poolie
1 hour ago, Grant said: How do you reply to the live forum on GMThailand etc: I can’t seem to find live replies anywhere? They must confiscate their vehicles for at least 3 days to teach them a lesson! You…

Pinetree
17 minutes ago, Poolie said: You are allowed addendums. I cant moan for everybody, I'm only one man! Moan along, help yerself! 😃 You make a good job of trying; as indeed do I 🤣

Poolie
5 minutes ago, Pinetree said: You make a good job of trying; as indeed do I 🤣 I do my best. I was told your best is always good enough. 😃

Pinetree
9 minutes ago, Poolie said: I do my best. I was told your best is always good enough. 😃 I do too, but somehow I still manage not to upset too many people, which is really not the aim at…

Poolie
2 minutes ago, Pinetree said: I do too, but somehow I still manage not to upset too many people, which is really not the aim at all. Some people were born upset. Nothing to be done about that.

Oklahoma woman searches for Thai mother, nearly 50 years after US family adopts her