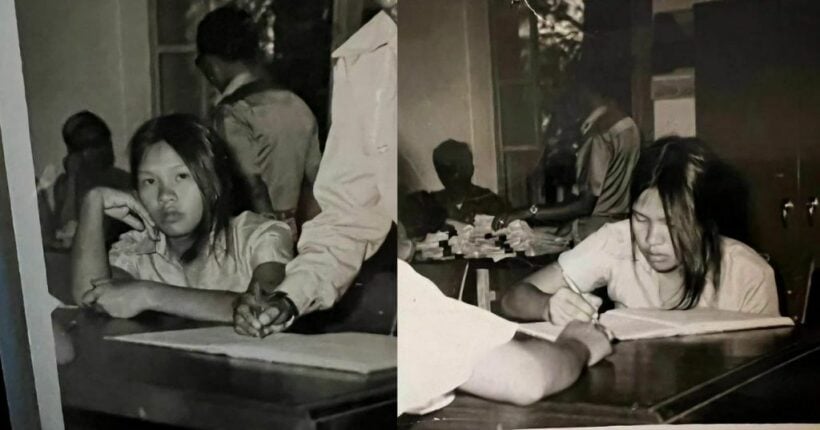 Old pictures of Kristy's birth mother when she was about 20 years old. | Photo via Ubon Ratchathani Provincial Public Relation Office

An American woman is searching for her Thai mother, who is believed to live in the Isaan province of Ubon Ratchathani. She says her father was an American soldier who met her mother when he was based in Thailand during the Vietnam War.

In March of this year 49 year old Kristy Sinsara Hudsud, an American singer and songwriter, started searching for her Thai mum. Kristy shared that she was adopted by an American family in 1975, when she was about 3 years old and has been living in Oklahoma ever since.

Later when she was an adult, she found out that her birth mother had actually wanted to take her back, before her parents took her home to the US. Her birth mother had reportedly followed them all the way to Bangkok when they were about to board their flight. So 46 years later, she embarked on a mission to find her long lost Thai mother.

Kristy started with her birth certificate, which had her mother’s name on it. She asked a local owner of a Thai restaurant to help her read the document in Thai. The restaurant owner passed on her story to the Thai media, which made it go viral. The documents Kristy provided included her picture when she was 3 years old, pictures of her mum at the age of 20 and her original Thailand birth certificate, which showed that her mum’s name was Lek Sinsara. She was living in Mueng district of Ubon Ratchathani province at the time of birth.

Thai reporters helped her discover information about her mom by visiting Ubon Ratchathani province and talking with the residents there. On April 9, the reporters went to a community near Moon River where most women who had American soldier husbands lived. The reporter found a 70 year old woman, Tew, who had married an American soldier. She knew Kristy’s mother and said she used to help take care of Kristy when she was young. Tew said she used to meet with the sister of Kristy’s mother a long time before. The sister said Kristy’s mother had a new foreign husband. So she guessed Kristy’s mother might not live in Thailand now.

As the search continued, Kristy’s story went viral via Thai television’s Channel 3. Kristy sent a video to Thai reporters talking about her mother and the memories she could remember. She said she loved her mother and felt grateful for what she had done for her.

She said that although she was adopted and loved by her American family, which had given her a lot of opportunities in the US, she still wanted to hug, love and say “thank you” to her birth mother. She also said she felt grateful for all those who had helped and supported her in her search.

HolyCowCm
Hope she gets lucky. It's not like her mom like totally threw her away as how the story went. Sounds like a second thought and tried to get her back. If the mom married an American guy and then went…
Marc26
We have a crazy story...........and happened through covid My MIL had a sister who was basically "kidnapped" kind of She went to live with another family when she was young and the family just left with her, moved and…
JackMeOff
I think she wants back pay with interest on her missed allowance.