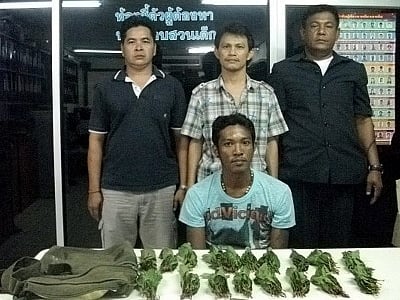 PHUKET: Phuket police arrested a man for selling drugs in Rawai on Saturday, seizing his stash of marijuana and multiple bundles of kratom leaves in the process.

Acting on a tip-off, Lt Col Charan Bangprasert of the Chalong Police dispatched a team to a construction site in Rawai, where the suspect was reportedly supplying drugs to Burmese workers.

The suspect, 30-year-old Prasert “Dam” Thongchan of Phang Nga, was arrested at 7:30pm after he was found in possession of 360 kratom leaves and an unspecified amount of marijuana.

Mr Prasert was charged with possession with intent to sell the two Category 5 drugs.

Kratom has been regulated in Thailand since 1943, when it was made illegal to cultivate it and to cut down existing trees. This proved ineffective as the species is native to the region and is abundant in the wild.

More effective legislation came into effect in 1979 with the Narcotics Act, which listed kratom with marijuana as a category five drug.

As of September 2011, kratom was listed as a controlled substance in Australia, Bhutan, Denmark, Finland, Latvia, Lithuania, Sweden and Thailand.