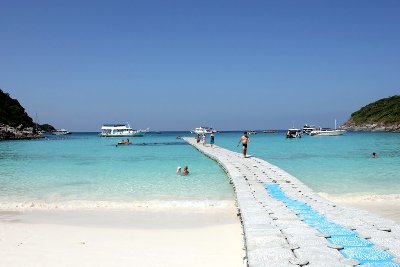 PHUKET: Speedboats on day trips from Phuket that dock at the floating pier on Racha Yai Island will be charged a mooring fee from January 1 to help fund the cost of repairs to the facility.

“The Racha Hotel provides the pontoon and allows everyone to use it, but they never ask for money to maintain it,” committee president Sarit “Bung Mad” Jundee, 50, told the Phuket Gazette.

“The money collected will go towards the upkeep of the pier. We know that fees will not be enough to cover all the maintenance costs, but the club would like to do something to help out,” he said.

The conservation committee of the Koh Racha Yai Club agreed to introduce the fees at a meeting on Saturday, Mr Sarit explained.

“A daily fee will be charged at 20 baht per engine. For a one-engine speedboat the tariff will be 20 baht, rising to 80 baht for a four-engine vessel. However, longtail boats will be charged a flat rate of 30 baht,” he said.

“The pier is stationed at Patok Bay for the high season and then taken to Ter Bay for the low season to avoid the rough monsoon seas,” he added.

Garry Halpin, founder and owner of Raya Divers and a member of conservation committee, said that the pier was frequently damaged by rough seas, the monsoon weather and the sun causing the material to deteriorate.

“The pier cost nearly a million baht to install. We would like to at least help pay to maintain it,” he said.