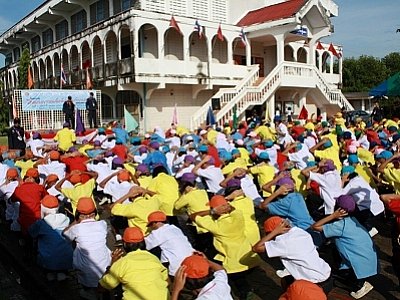 PHUKET: About 300 students yesterday began their first day of an “anti-drugs camp” as part of a new campaign by Phuket City police targeting youngsters.

The children, from schools throughout Phuket Town, gathered at Srinagarindra The Princess Mother School Phuket (or “Chalermprakiat School“) in Saphan Hin for the four-day camp, which ends on Thursday.

“Drug addiction is still a big problem in Phuket, and the problems caused by drugs have been continually increasing,” said Phuket City Police Superintendent Chote Chidchai.

“The age group of the people who become involved with drugs is 15-25, and 70 per cent of them are new drug users,” he added.

The most common drugs used in Phuket were amphetamines, ecstasy, crystal methamphetamine, marijuana and inhalants, among other types, he said.

The camp project, launched under the name the Anti-drug Training Program for Youths of the year 2011 campaign, through a series of exercises and creative activities aims to educate youngsters about the dangers of drug use and how to avoid drugs.

The campaign is being held in conjunction with the Phuket Educational Service Area Office, Wichit Municipality, Rassada Municipality, the Fight Against Drugs Campaign Center of Phuket and other government agencies.

A second four-day drug camp for another 300 students will be held this weekend, from September 10-13, said Col Chote.

The school where the second camp will be held has yet to be decided, he added.

Raided, a Phuket drugstore coughs up colorful comments from officialdom

Phuket Live Wire: What to expect from your ISP