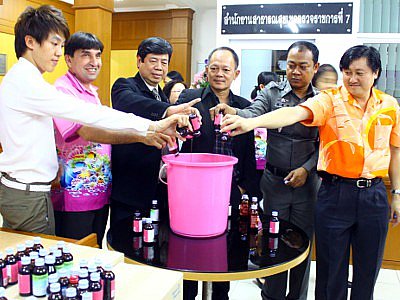 PHUKET: A police raid on an out-of-town pharmacy last Friday coughed up more than the Phuket authorities were looking for.

Inside the drug store, officers found 138 Alprazolam (Xanax) pills for sale – and more than 6,000 bottles of cough syrup.

“The store owner was charged with possession of Alprazolam with intent to sell without a license,” said Lt Col Sanich Nookong, Deputy Superintendent of Thalang Police.

He declined to name the person charged.

Alprazolam is classified as a schedule IV controlled substance under Thai law, making it legally available only on prescription through licensed pharmacists.

“A total of 6,288 bottles of cough syrup containing Diphenhydramine were seized from the store.

“Even though Diphenhydramine in cough syrup is legal, having more than 6,000 bottles in one shop is unusual,” he said.

Doubting that the store was single-handedly combating an unseasonal outbreak of the common cold, Dr Sak said, “We believe that the shop was selling the syrup to teenagers to be used for things other than curing a cough.

“We received reports from Thalang police that many teenagers came to the shop to buy cough syrup. That’s why we raided it.”

The use of cough syrup in a local concoction called “4×100” – combining the medicine with kratom tea, cola soft drink and ice – is well known throughout Southern Thailand.

“The shop owner gave all the cough syrup to the authorities to destroy so they can set an example to all the other drug stores that sell cough syrup to teenagers without considering what the medicine will be used for,” Dr Sak said.

Somsuk Sumparnprateep, chief of the Health Office’s consumer protection department, warned, “There are more than 330 [registered] drug stores in Phuket. Some of them might be selling medicine to be used inappropriately.

“We [the Health Office] are launching a project to prevent drug abuse by focusing on ensuring that drug stores in Phuket sell drugs in accordance with professional medical ethics,” he said.