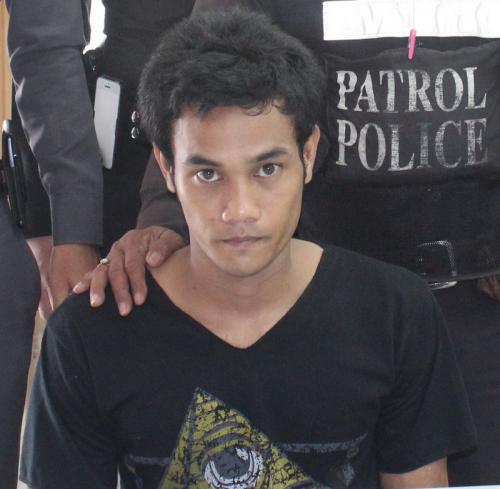 PHUKET: A 24-year-old local handyman says Phuket’s lack of public transport is the reason he stole a motorbike to go visit a friend.

Mr Koson was found in possession of a Yamaha Fino that was reported stolen by its owner, Suraphong Makum, last week.

“Mr Suraphong reported that he left his bike running while he got off to answer his mobile phone on Sri Suthat Road at 9pm last Thursday night,” Maj Kritsana Jannit of the Phuket City Police explained.

“He saw Mr Koson run up, jump on the bike and ride off. Mr Suraphong called us again this morning [May 28] when he saw his motorbike parked in front of Surin Road Soi 3,” he added.

Police arrived at the scene and waited for the thief to return.

“As we approached the motorbike, he saw us and quickly rode off,” Maj Kritsana said.

Police gave chase and caught up with Mr Koson at the old market.

“He dumped the bike and ran, but we surrounded him and eventually arrested him,” Maj Kritsana said.

Speaking in front of the press, Mr Koson claimed he needed to see a friend urgently, but had no way of getting across town to see him.

“I did not want to steal Mr Suraphong’s bike. I was just in a hurry as my friend is a police informant and he called me asking me to meet him right away. There was no public bus available because it was in the evening,” he said.

“I did not intend to steal – and I didn’t sell any of the bike parts [the motorbike was returned complete – Ed]. I just wanted to borrow it, but did not have time to return it to the owner,” Mr Koson said.

Despite his claims, Mr Koson was charged with theft.

“He has admitted that he stole the motorbike. He is now being detained for further questioning,” Maj Kritsana said.