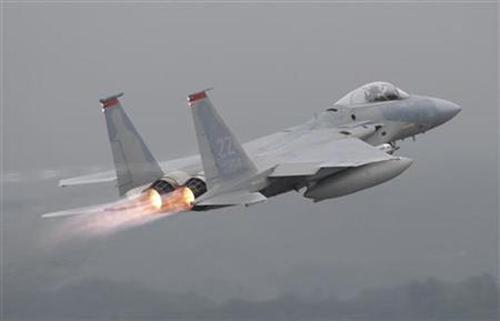 PHUKET: A U.S. Air Force fighter jet crashed in the Pacific Ocean off the Japanese island of Okinawa yesterday morning, but the pilot was safely recovered after ejecting from the aircraft, U.S. and Japanese officials said. The cause was not immediately known.

The accident happened at around 9am local time when the F-15 aircraft crashed in the Pacific Ocean approximately 112 kilometers (70 miles) east of Okinawa island, which is located south of the Japanese mainland. The aircraft was based at the island’s Kadena Air Base.

Japan Air Self Defense Force rescue squadron crews safely recovered the pilot who ejected from the aircraft before it crashed into the ocean. “The pilot is in stable condition and is being evaluated at a military medical facility,” Kadena Air Base said in a brief statement, adding that the pilot’s name could not be released.

The cause of the crash was not immediately known.

The meeting comes as NATO and the United States prepare to withdraw most troops from Afghanistan, ending a lengthy war that began after the September 11, 2001, attacks on the United States.

More than 60,000 U.S. troops are still in Afghanistan. Obama is due to announce in the coming weeks how many combat troops the United States will leave in the country next year, and how many forces will stay behind to train and support Afghan forces and carry out some operations.

“The President looks forward to discussing global and regional security concerns with the Secretary General, to include ending the war in Afghanistan while building an enduring partnership with the Afghan government,” Carney said in a statement.

Officers heard shots around 4:25am at the Antonella 2012 club, better known as “Angelus” in the upscale Chacao district, a police source told Reuters.

One of the embassy employees, military attache Roberto Ezequiel Rosas, was shot in the leg after a fight between club patrons, according to a police report seen by Reuters and the source, who spoke on condition of anonymity.

The second embassy official was shot in the stomach but did not notice the injury until arriving home, the source said.

In a terse statement, the embassy confirmed an “incident,” but gave few details.

“We can confirm that two members of the U.S. Embassy in Caracas were injured during an incident early this morning. Medical staff informs us that their injuries do not appear to be life-threatening,” the statement said.

In the afternoon, Reuters reporters saw police detective vehicles parked near the club, which is popular among foreigners. Officials walked in and out of the club without answering questions.

Venezuela has one of the world’s highest homicide rates. Violent crime occurs primarily in the country’s poor slums, but in recent years, assaults and shootings have become more common in well-to-do areas of the city.

Last week, President Nicolas Maduro launched a security drive that puts soldiers on the streets of the capital. About 20 security initiatives have been implemented since 1999.

The Venezuela shooting may revive memories of an incident that embarrassed U.S. officials in Colombia last year. In that case, Secret Service agents helping to protect President Barack Obama were sent home for involvement with prostitutes.