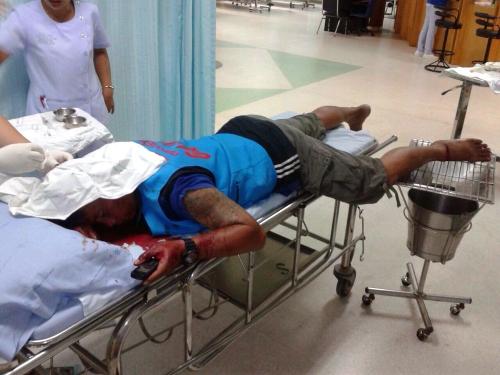 PHUKET: A friendly argument took a serious turn yesterday morning when a Patong motorbike taxi driver took out an axe and struck a colleague twice, sending him to the hospital.

When police arrived at the motorbike taxi queue in Soi Kebsap (map here) just before 10am, they found only a pool of blood, said Maj Jakkrapong Luang-aon of Patong Police.

Sompong Pukanka, 41, had already been taken to the hospital with axe wounds to his head and foot. His attacker had fled.

“We learned the suspect is Saroj Chaiyasit, 34,” Maj Jakkrapong said. “We tracked him to the beach road and arrested him.”

“They were joking at first, but then started arguing. We don’t know what about,” he said.

Police are waiting for Mr Sompong to recover, then will call him in for questioning.