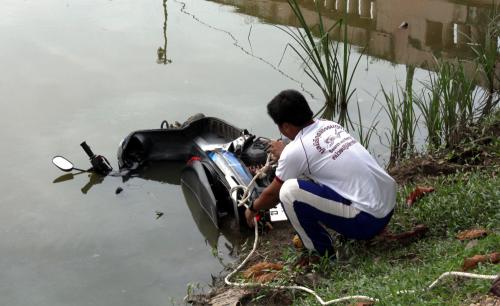 PHUKET: Police and local residents are scratching their heads over a motorcycle found dumped in a pond at Rama IX Park (King’s Park) in Phuket Town (map here) yesterday morning.

“The bike, with a Ratchaburi license plate, Kor Mor Ror 407, was dumped in the lagoon but only half submerged,” Phuket City Police Lt Phumi Saemaworranon said.

Kusoldharm Foundation rescue workers removed it from the pond. The bike was entirely intact.

“We believe it might be the work of a gang of motorbike thieves who dumped it,” said Lt Phumi.

“We are now investigating who the registered owner of the motorbike is and checking whether it has been reported stolen,” he explained.