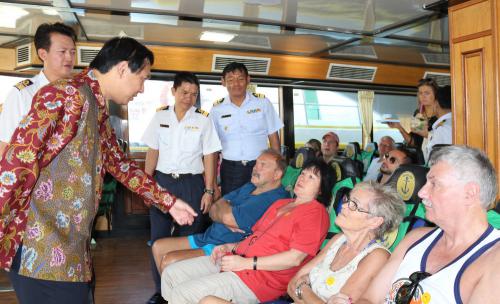 PHUKET: Officers from the local Marine Office led by Phuket Governor Maitri Inthusut today conducted safety inspections of ferries and other tourist boats operating out of Rassada Pier as part of a safety drive for the new year.

Rassada Pier, located on the east side of Phuket Town (map here), is a major jump-off point for tourists boarding ferries and tour boats to islands in Phang Nga Bay and along the Andaman coast.

“The officers responsible for the operation of piers in Phuket have to strictly enforce safety regulations. It is for the safety of tourists as many tourists use boat services during the New Year,” Governor Maitri said.

In addition to boats having to pass safety inspections, the captains and crews are required to pass alcohol breathalyzer tests.

Overloading, which was attributed as the cause of a ferry sinking off Pattaya earlier this year, leaving six tourists dead and at least 26 injured (story here), was also targeted.

“Each boat must carry no more than the maximum number of passengers for that vessel,” Governor Maitri warned.

“We are co-ordinating with officers from the Marine Police and the Phuket Land Transport Office to inspect all boats before they head out to sea,” Mr Phuripat said.

“Any boat captains and crew found to be involved with drugs will be prosecuted,” he added.

That warning, however, came too late for one tourist speedboat captain and his crewman who were both arrested at Boat Lagoon yesterday (story here) after dropping off tourists, and then testing positive for ya ice (crystal methamphetamine).