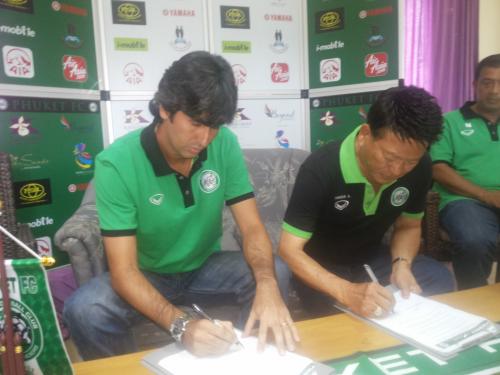 The game, the Yamaha League One’s 2013 season’s 21st clash of the 34 match campaign, will be played at Surakul Stadium with a 6:30pm kickoff (click here for map).

“As a Brazilian, I like to play attacking football…We have good midfielders and defenders, and I will work on improving our attacking game. I prefer 4-2-2-2, or 4-3-3 formations, and all I can promise is that we will be working hard for three points.”

Asked whether he likes to rotate players in the starting line-up – a strategy often employed by Phuket’s last coach – Coach Teco was firm in his response. “That’s not my style. If players do well, they will stay on the starting 11, granted they are not injured or banned. I try to keep at least eight starters constant.”

As former coach of Thai Premier League side Chiangrai United, Coach Teco is already well-acquainted with many of Phuket’s current players, who used to play against him in the TPL, including Geoffrey Doumeng, Luiz Purcino, Ludovick Takam and Sukree E-tae.

“These are all decent players and I’m aware of their strengths and styles,” he said.

Another player he gave praise to was fellow Brazilian Cristian Alex.

“Alex’s really talented and I’m looking forward to working with him. Although he’s been fielded as a striker so far [with Phuket], he’s originally a midfielder, so I may let him play where he’s more comfortable in the midfield. We’ll have to see as he is willing to play both positions,” Coach Teco told the Phuket Gazette.

Asked about starters, injuries and players who would not play on Sunday, Coach Teco declined to give details. “You will find out on Sunday who will play. I don’t want to give Nakhon Pathom any advantage.”

Nakhon Pathom are in 9th place of the 18 team league with 26 points, while Phuket are slightly better off in 7th with 29 points – 8 points shy of the Singtharua Port Lions in 3rd place, the final promotion spot for the TPL.

“I took on this job because of the challenge it poses. I like challenges. My only promise is that we will be working real hard,” Teco reiterated.

“I want to invite fans to come to show their love for Phuket FC on Sunday… to cheer for three points and to give support to the players, and most importantly, to be respectful and maintain dignity for Phuket. This will make a happy birthday for me…”