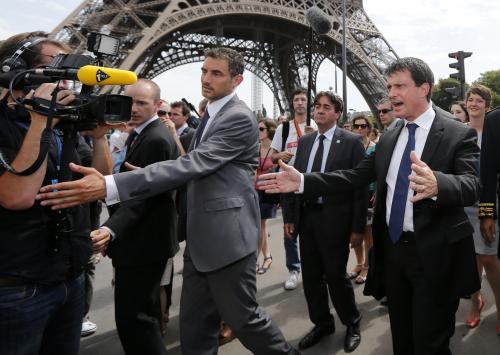 
Eiffel Tower reopens after bomb scare
Reuters / Phuket Gazette
PHUKET: Hundreds of tourists were evacuated from Paris’ Eiffel Tower on Friday afternoon in response to a bomb alert, but it was found to be a scare and the tower was reopened two hours later, police told Reuters.

Police sent a bomb disposal unit to inspect the monument after an anonymous phone call triggered the alert around 2 p.m. (1 p.m. British time), but the team found nothing suspicious and the tower was reopened, a police official said.

The tower is regularly subject to bomb scares but the threats only cause full evacuations a couple of times a year.


Obama describes Putin as looking ‘like a bored kid’
Reuters / Phuket Gazette
PHUKET: President Barack Obama on Friday denied he has poor relations with Vladimir Putin after cancelling their Moscow talks, but said the Russian president can sometimes appear “like a bored kid in the back of the classroom.”

U.S.-Russian relations plunged to one of their lowest points since the Cold War this week after Russia granted temporary asylum to fugitive former U.S. spy contractor Edward Snowden. Obama retaliated by abruptly cancelling a Moscow summit with Putin planned for early next month.

At a White House news conference on Friday, Obama insisted that he does not have bad personal relations with Putin. The two men had a testy meeting in June in Northern Ireland and from the photos of them at the time, it looked as if they would both rather have been somewhere else.

“I know the press likes to focus on body language, and he’s got that kind of slouch, looking like the bored kid in the back of the classroom. But the truth is that when we’re in conversations together, oftentimes it’s very productive,” Obama said.

Putin’s sending of a telegram wishing former President George W. Bush well after a heart procedure this week was viewed by some Kremlin watchers as a sign that Putin was sending an implicit message to Obama.

The White House says Obama pulled out of the Moscow summit not just because of the Russian decision to grant asylum to Snowden, who is wanted in the United States to face espionage charges.

U.S. differences with Russia have piled up recently over Moscow’s support for the Syrian government in that country’s civil war, as well as human rights concerns and other grievances.

There was no immediate response from Moscow to Obama’s description of the Russian president. But at a news conference in Washington after talks on Friday between the Russian and U.S. foreign policy and defence chiefs, the Russians emphasized how positive the meeting had been. They even invited the Americans to participate in a tank competition later this year.

“We don’t have any Cold War. Instead we have close relations,” Russian Foreign Minister Sergei Lavrov said. “Edward Snowden did not overshadow our discussions.”

Obama said the United States will “take a pause, reassess where it is that Russia is going” and calibrate the relationship to take into account the areas where they can agree and acknowledge that they have differences.

“Frankly, on a whole range of issues where we think we can make some progress, Russia has not moved,” Obama said.

“I think there’s always been some tension in the U.S.-Russian relationship after the fall of the Soviet Union,” he said.

Obama did resolve one issue that has been debated in the United States. He said American athletes will in fact compete in the Sochi Winter Olympics in 2014, in spite of Russia’s anti-gay propaganda law.

“I do not think it’s appropriate to boycott the Olympics,” Obama said.

He said the best way to combat the law is for gay and lesbian athletes to do well in the Sochi Games.

“One of the things I’m really looking forward to is maybe some gay and lesbian athletes bringing home the gold or silver or bronze, which would, I think, go a long way in rejecting the kind of attitudes that we’re seeing there,” he said. “And if Russia doesn’t have gay or lesbian athletes, then, it’ll probably make their team weaker.”

U.S. and Russian senior officials sought to maintain a working relationship despite the tensions when they met in Washington on Friday.

The two countries agreed on the need to convene a Syrian peace conference in Geneva as soon as possible at the meeting between Secretary of State John Kerry, Defence Secretary Chuck Hagel, Russian Foreign Minister Sergei Lavrov and Defence Minister Sergei Shoigu.


Rally for Mursi in Cairo, clashes in rural Egypt
Reuters / Phuket Gazette
PHUKET: Thousands of supporters of ousted Egyptian President Mohamed Mursi rallied in a protest camp around a Cairo mosque on Friday, defying warnings from the army-installed government that they should give up and leave.

Leaders of Mursi’s Muslim Brotherhood mounted a stage at the Rabaa al-Adawiya site to demand that he brought back to power.

“Soldier, your place is not in politics,” senior official Ahmed Aref said as the people pumped fists in the air.

Despite international concern that a violent confrontation was imminent, security forces were nowhere to be seen.

But in the rural province of Fayoum, police broke up clashes between several hundred supporters and opponents of Mursi with teargas, security sources said. Seven protesters and five policemen were hurt.

And in separate incidents in the Nile Delta province of Gharbiya, four people were injured in fights between pro-Mursi protesters and residents near an army base, state-run Al-Ahram newspaper said. Thirteen Mursi supporters were arrested.

The Rabaa camp in northeast Cairo is the major potential flashpoint of the political crisis brought on by the military overthrow of the Islamist Mursi and establishment of an interim government five weeks ago.

Crowds chanted “Down with the coup, the coup is terrorism” as thousands streamed in from other mosques in columns.

Security forces have warned the protesters to leave peacefully or face action. But the camp has been turned into a virtual fortress, protected by sandbag-and-brick barricades.

“Kill as you like. We will not move from here,” a preacher told worshippers at Friday prayers in the mosque. “This is a revolution. You who are present will make the decision on whether you will disperse.”

Despite the clashes elsewhere, an undeclared truce seems to have taken hold at Rabaa over the Eid al-Fitr holiday, which celebrates the end of the Muslim fasting month of Ramadan and finishes on Sunday.

No police or troops could be seen in the immediate vicinity on Friday afternoon and after the speeches, the event took on a festive air, including performances of traditional dance.

Some Egyptians felt the security forces would not attack before the end of Eid as this would be sacrilegious.

But a diplomat from a European country said his country was worried about the risk of violence this weekend.

“It’s a dangerous situation. There is a concern that things could turn serious on Saturda