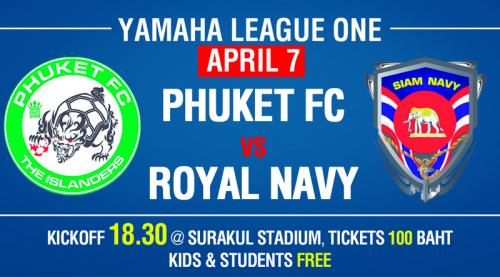 PHUKET: Phuket FC’s Southern Sea Warriors will be hoping to keep their unbeaten start to the Yamaha League One season going when they face Royal Navy tomorrow at Surakul Stadium.

In the two games the teams played against each other in the league last season, Phuket FC lost 2-0 at Royal Navy Stadium, Chonburi, and won 1-0 at Surakul Stadium.

Phuket FC go into tomorrow’s game on the back of a hard earned 1-0 victory against Thai Tobacco Monopoly (TTM) last weekend in Bangkok, and are currently second in the league after a strong start to the season. Royal Navy are languishing in 14th place.

The Sea Warriors have played four games so far in Yamaha League One, winning two and drawing two. Their only defeat this season was a 1-0 loss at home against PTT Rayong in the Toyota League Cup.

Star player Eduardo “Dudu” Purcino could miss the game tomorrow as he told the Phuket Gazette yesterday that he has been out of the country:

“I still don’t know whether I will play because I’m going back to Phuket now [April 5] after spending two days in Malaysia for a new visa and work permit,” he said.

Either way, fans need not to worry, and should prepare to see a good match.

Asked if he would be fielding the same starting 11 as in last week’s 0-1 away win to the Thai Tobacco Monopoly in Bangkok, Coach Tu said he might change one or two players (click here to see Phuket FC’s starting 11 in last week’s match)

“All of our players will play firmly and cautiously,” he said.

Phuket’s stalwart defenders Ivorian Nenebi Slyvester and Japanese Sato Yusuke both told the Phuket Gazette that they’re not worried about the Thai Navy and are confident for a win on Sunday.

The match tomorrow kicks off at Surakul Stadium (map here) at 6:30pm. Tickets are 100 baht, kids and students get in for free.