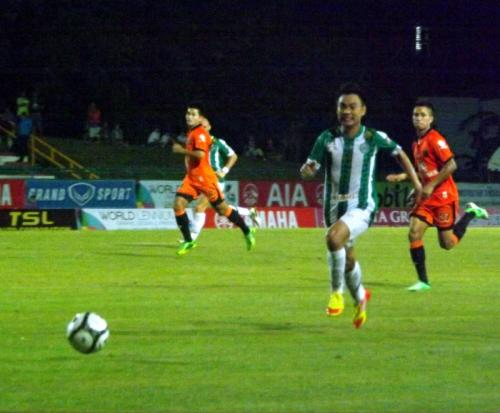 The first half started brightly with both sides adopting an attacking style but the end-to-end football was quickly replaced by caution.

Phuket FC started the match against the Dragons, who were promoted to the TPL after winning last season’s Yamaha League 1 title, with a full strength team including: Dudu, Geoffrey Doumeng, Nenebi and Sato who once again formed the spine of the starting 11.

The disappointing first half drew to a close with neither side really testing the opponents’ keeper.

The second half threw up a number of chances and Phuket’s Eakartit Somjit was in the thick of the action.

After the restart, Eakartit wriggled past two defenders on the edge of the box, striking a shot that was parried by Rachaburi’s keeper to Dudu, whose shot was cleared off the line by a defender.

Eakartit broke the deadlock when he ran onto a pass that broke Rachaburi’s offside trap to slot the ball past the advancing keeper.

Phuket continued to attack and Sato should have done a lot better with a free header from eight yards out.

However, a defensive mix up allowed striker Chana Sonwiset to slot the ball into an empty net and seal Phuket’s win.

The Islanders next game is a tough home match against 6th placed Nakhon Ratchasima FC (Korat), who are only two points and one place behind them in the league.

The game kicks at 6:30pm this Saturday (June 29) at Surakul Stadium (click here for map). Tickets are 100 baht and students and children get in for free.