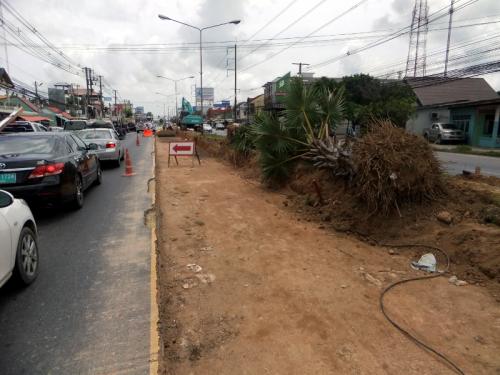 PHUKET: The northbound u-turn lane at the Koh Kaew intersection on Thepkrasattri Road is in the process of being lengthened in an effort to tackle the chronic congestion in the area.

“Right now the u-turn lane is not long enough for all the cars that want to turn at the Koh Kaew intersection, and cars that can’t get into the turn lane are blocking traffic that is headed northbound, causing traffic congestion,” Phuket Highways Office Director Samak Luedwonghad told the Phuket Gazette yesterday.

Mr Samak credits Phuket Governor Maitri Inthusut with the idea to lengthen the lane from 100 to 300 meters.

“It came out of a discussion Gov Maitri had with local organizations about how to solve traffic problems,” he said.

“Our office received a budget of about 900,000 baht from the Department of Highways in Bangkok to expand the u-turn lane starting 50 meters before the Super Cheap mini-store,” he said.

“The construction started last Saturday and we expect to be done sometime next week,” he added.