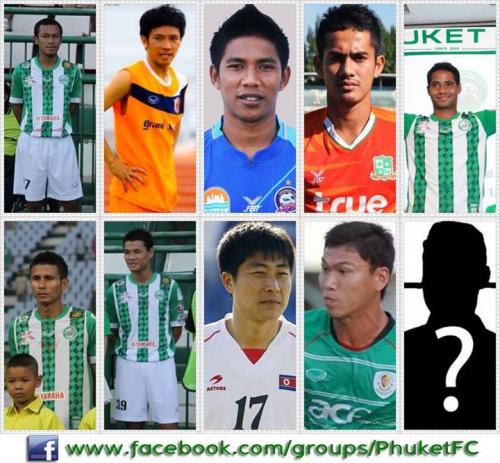 PHUKET: In their dedicated drive to get promoted to the Thai Premier League (TPL), Phuket FC have regrouped mid-season, signing 10 new players to help them in the final 17 matches of the Yamaha League One (YL1) 2013 season.

The new signings include seven Thais, a Brazilian, North Korean and Cameroonian.

The club has not made any official announcements about outgoing players.

The season’s first half had a disappointing conclusion for the Islanders, who were unable to remain in the top five, losing at home last Saturday evening to Nakhon Ratchasima FC, and thus swapping 6th and 5th place standings.

That tense match’s only goal was scored by the visitors’ Japanese striker and leading scorer, Yusuke Kato, who netted his ninth goal of the season.

Also continuing to make a name for Bangkok FC, Brit Lee Tuck (12 goals) is on track to claim the top scorer honors for the second year in a row, while Khon Kaen’s Argentine Recio Eduardo, along with Nakhon Pathom’s Ivorian, Camara Souleymane are joint second with 10 goals each.

Meanwhile, Phuket’s top scorers – Luiz “Dudu Purcino (6 goals), Giorgi Tsimakuridze (4), Geoffrey Doumeng (3), Ivorian Nenebi Sylvestre and Thai Chana Sonwiset (2 each) – are all hoping to regain their rhythm in the season’s final 17 matches, but have some fresh team building challenges ahead of them.

Although 6th placed Phuket are only 4 points behind 3rd place, Bangkok FC (29 points), competition for the final promotion spot to the TPL is heating up with a handful of teams in the mid-table region still in contention.

Meanwhile, the top two teams, Air Force (40 points) and PTT Rayong (36 points) should not have too much trouble maintaining their momentum towards the TPL.

Although the BBCU Pink Panthers also have 25 points, Phuket’s goal difference of +5 gives them an edge over BBCU (0).

Phuket’s other nine new signings are as follows:

All YL1 Fixtures this Weekend:

Other Phuket FC fixtures in July

Corpse found by the road in Rawai