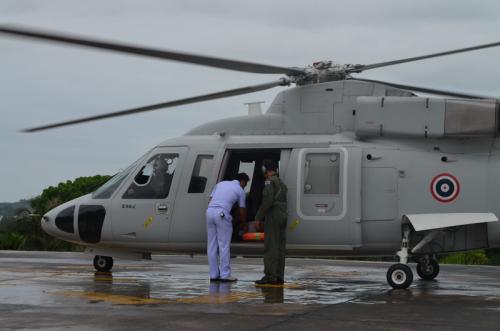 PHUKET: Officers from the Royal Thai Navy Phuket base resumed their search this morning for 11 crewmen still missing from the Bangladeshi cargo ship MV Hope, which remains foundering in the Andaman Sea south of Phuket.

“We sent out two helicopters and the HTMS Pattani at 6am,” Capt Thammawat Malaisukkarin, Director of the Naval Civil Affairs told the Phuket Gazette.

“The sea is calm today. These are good conditions for conducting the search,” he said.

The search team will focus on a target area of 10 nautical miles from the ship.

However, today may be the final day of the search mission.

“If we cannot find the crew today, we might call off the mission. We don’t think people can survive more than 24 hours at sea,” Capt Thammawat said.

Strong waves overnight have pushed the MV Hope about 20 miles south of where it was spotted yesterday.

“The boat is not in a busy shipping lane, but we have informed all boats of the Hope‘s location,” Capt Thammawat said.

Efforts to salvage the stricken vessel are also being considered.

“Officials from the Bangladesh embassy in Bangkok will come to the Navy base today to discuss what to do about the ship,” Capt Thammawat said.

“If the boat stays listing at sea, it might leak oil or worse. We will discuss this as soon as the embassy officials arrive,” he added.

“We will also contact the Hope‘s operating company through the Bangladesh embassy to ask them what we can do until they arrange a salvage team,” Capt Thammawat explained.

“Mr Siddiue is recovering well,” a staffer at Vachira Phuket Hospital told the Gazette this morning.

“We gave him antibiotics as his lungs are infected from choking on sea water,” she added.