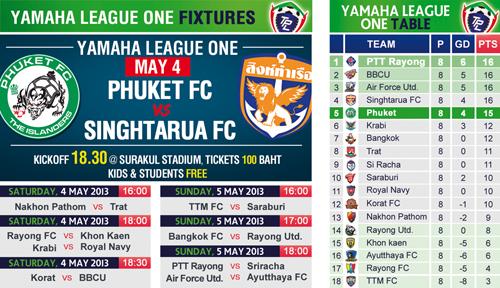 PHUKET: The Islanders will be hoping to get their push for promotion back on track when they host 4th place Singhtarua FC at Surakul Stadium this evening.

Phuket FC lost their last away game to Air Force United 2-1. The match was the second time in three days the two teams played each other at Thupatemee Stadium, on the northern side of Bangkok, with Phuket knocking Air Force out of the Thai FA Cup 1-0 on April 24.

Nenebi, Dudu and Sato, who were rested for the FA Cup match, were recalled to the starting 11.

Before the match, Phuket were joint top of the league, but their inferior goal difference kept them in 3rd on 15 points, and Air Force were just below them in 5th on 13 points.

The defeat dropped Phuket to 5th in the league and moved Air Force to 3rd, level on points with the top two teams PTT Rayong and BBCU FC on 16 points.

The Islanders play 4th place Singhtarua at Surakul Stadium on May 4 at 6.30pm. Phuket will host Ratchaburi Mitr Phol FC in the Thai FA Cup round of 32 on June 26th.

Today’s match sees Singhtarua one point and one place above Phuket, with the top four teams level on 16 points to Phuket’s 15.

Bangkok-based Singhtarua were relegated from the Thai Premier League (TPL) last season and they are among the favorites, along with Phuket, to gain promotion this season.

Phuket’s defenders will have to try and curb the attacking abilities of Singhtarua’s Brazilian striker Leandro da Luz, who tops the Yamaha League One goal scoring chart with seven goals. The Islander’s top scorer Luiz “Dudu” Purcino is joint fifth with four goals.

This home game is the perfect opportunity for Phuket to make up for their loss against high-flying Air Force last weekend, and show the other teams in the league that they are serious promotion contenders.

The match kicks off at 6:30pm at Surakul Stadium (click here for map). Tickets are 100 baht, children and students get in for free