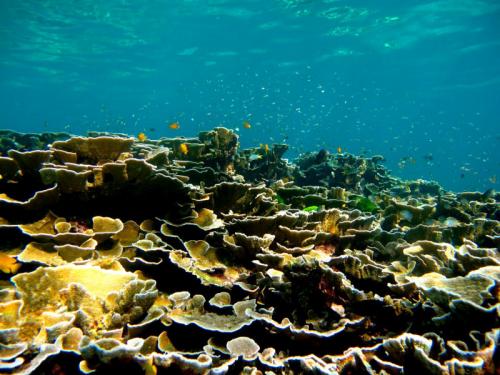 PHUKET: With only two weeks remaining until the deadline set by Phuket Vice Governor Sommai Prijasilpa to have environmental protections in place on Racha Yai Island, questions are being asked about how much has been achieved and what remains to be done to protect the popular tourist island’s pristine environment.

A campaign lasting nearly a year asking for government help to protect the environment on the island, about 25 kilometers south of Phuket, was answered six weeks ago when V/Gov Sommai visited.

On February 8, she saw for herself the problems that increased tourism and lack of regulation have brought: mishandled wastewater and garbage, encroachment, and diving practices potentially harmful to coral.

V/Gov Sommai delegated responsibility for solving the problems and set a two-month deadline to put environmental protection measures in place.

A low-cost wastewater treatment machine developed by Kasetsart University could help island businesses deal properly with their wastewater before it is released into the sea, but five machines are needed and it is not clear where funding will come from.

V/Gov Sommai assigned the Natural Resources and Environment Phuket office to address the wastewater problem, and the Director of Environment, Nutthakrit Polpetch, explained his proposal to the Gazette last week.

“Our department got an idea from Nonthaburi that is using a wastewater treatment system from Kasetsart University. This low-cost system was developed at the initiative of His Majesty The King Bhumibol Adulyadej.”

“Comparable wastewater treatment machines cost about 10 million baht each, but the machine invented by Kasetsart University costs only 4 million baht and can treat about 100 cubic meters of water per day, using low energy,” Mr Nutthakrit said.

“The Racha resort has volunteered to buy this machine and be a model for us. They are in the process of approving a budget for it and negotiating and coordinating with Kasetsart University to develop a machine adapted to the island environment. Funding is an issue and we will need to ask local business owners to share the costs,” he said.

“We probably need four more machines in addition to The Racha’s to support all the businesses on the island,” he added.

The trash-disposal problem was assigned to Rawai Municipality.

For the local people on Racha Yai, there isn’t a garbage problem, said Chief Administrative Officer (Palad) Rachen Phuntarakit: “They just bring their own trash to the mainland. They drop it off at Friendship Beach [map here] in Rawai, and then we take it to the dump.”

The problem is with the hotels on the island, he said.

Rawai’s Director of Public Health, Surachad Jitmaid, has been tasked with solving the garbage problem.

“I have already had discussions with a couple of hotels on the island,” he said. “Rawai Municipality has set up two additional containers on Friendship Beach, bringing the total to three, and the hotels can take their own garbage there.

“We don’t have boats to transport their garbage, and we don’t have a budget to buy boats,” he said.

Mr Surachad said he is planning a meeting with business owners on the island soon, this month or next, to continue the discussion about trash management.

In the past four years alone, the coral surrounding Racha Yai has suffered damage from barges, cement that was tossed off a boat, soil dumped onto it from land clearing, and the coral bleaching of 2010.

The latest assault on the coral, according to Sarit Jandee, president of the Racha Conservation club, is Try-Diving, in which a professional diver grasps an untrained scuba-suited customer underwater and leads him on a tour.

Piya Koeysin of dive company Raya Scuba explained that coral could be damaged if the inexperienced diver were dropped by his carrier.

In her visit, V/Gov Sommai asked that action be taken to stop the practice.

Try-Diving was banned in an agreement reached by local businesses and Dr Pinsak Suraswadi, the director of the Department of Marine and Coastal Resources, at a meeting on March 15.

Dr Pinsak noted that the agreement reached was an extension of a previous agreement in which businesses on the island had agreed to protect the beauty of the environment, the safety of the divers and the health of the coral.

“Under the agreement, only scuba diving and snorkeling are allowed near the island, and the diving must be under the auspices of a professional diving association,” he said.

“I will send a report of this meeting to Phuket Provincial Hall to establish penalties and issue an announcement as fast as I can,” he added.

Contacted by the Gazette, Mr Sarit noted that one of the Try-Diving companies, Devil Divers, had apologized and already moved their offshore boat out of the area.

Mr Sarit plans to meet with Devil Divers again to find a way to accommodate clients they have already sold packages to. The other company, Dive Marine, still has a boat in the area, Mr Sarit said.

“We will wait for the official announcement from the Phuket Provincial Office,” he added.

It is not clear whether the last problem, encroachment, has been solved or not.

V/Gov Sommai asked the Phuket Marine Office to take care of it, and Chief Phuripat Theerakulpisut of that office told the Gazette, “This problem was resolved by the resort, which already razed a building.”

Mr Sarit, however, told the Gazette that the contentious structure was not a building but a wall in a stream that was blocking water from flowing to the sea. The wall is still in place, he said.