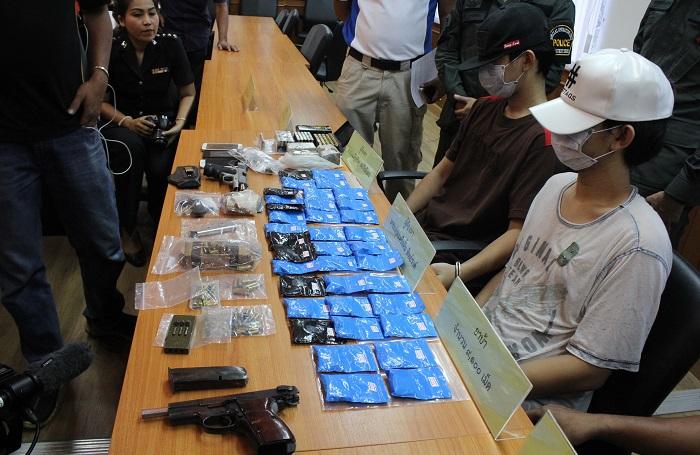 At a press conference yesterday, Phuket Provincial Police Commander Teerapol Thipjaroen and staff announced that the arrests had been made by following online leads.

“Mr Teerapong Rithirak, 23, was caught on June 23 in Chalong, while trying to sell 1,700 pills of methamphetamine (ya bah); 0.7g of crystal meth (ya ice); and 52.6g of marijuana (ganja) to our undercover agents,” Col Teerapol said.

Teerapong allegedly confessed that he had received the contraband from Kittipong Chaupol, 21.

Police estimate the value of the seized items at half a million baht, including a car, cash and three mobile phones. The suspects are being held at Vichit Police Station.

Mr Kittipong reportedly told police that he had been discharged from Phuket Provisional Prison for a drug offence last year.

“Kittipong said he received most of the material for his operation from a ‘Mr Yai,’ and procured the weapons from social networking sites pointing to dealers in Thailand’s central region,” Col Teerapol said.