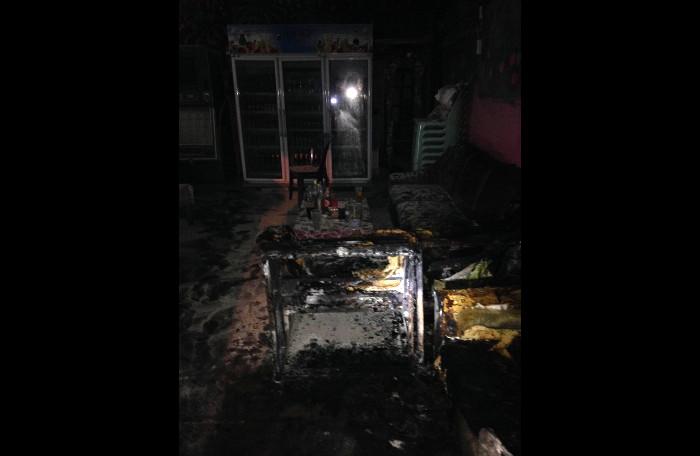 PHUKET: Police are hunting for a man who allegedly firebombed a Phuket Town karaoke bar yesterday after his phone was seized in lieu of payment for beer and a sing song.

Suvann Chaichana, the owner of ‘Fancy Karaoke’ in Phuket Town, reported that her shop had been firebombed just before 2am, says Maj Somchai Nooboon of the Phuket City Police.

“At the scene we found pieces of a broken bottle, burned sofas, and burn marks across the wall and doors. The fire had already been put out by staff before we arrived. Luckily, no one was injured,” Maj Somchai said.

Initial reports indicate that a man known as Dam, aged about 35, came in and ordered two bottles of beer and several karaoke machine tokens on June 25.

“He sat there until 1am when the staff presented him with his 300-baht bill,” said Maj Somchai. “Staff said he didn’t have enough money to pay the bill so they confiscated his phone and told him he could have it back when he returned to pay, to which he apparently agreed.”

Later that evening, a friend of Mr Dam’s called in to ask for the location of the shop. The friend brought 200 baht, promising to pay the remaining 100 baht balance later.

“Ms Suvann wanted to wrap up the issue, so she accepted the money and gave Mr Dam’s phone back to the friend,” Maj Somchai said. “At closing time, however, Mr Dam was seen on his motorbike and throwing a Molotov cocktail into the bar.”

No one was injured in the attack and Fancy Karaoke has announced that it will reopen today. Police are still hunting for Mr Dam.