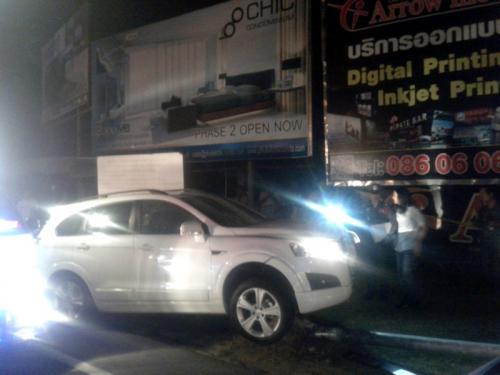 UPDATE: Police are now searching for a black Mitsubishi Triton pickup truck without license plates, which pulled alongside the victim’s vehicle when the shooting occurred. Police have yet to obtain descriptions of the gunman or the driver.

PHUKET: A woman driving alone south of Phuket Town was killed by a single gunshot into her head this evening.

Police arrived at the scene, at the junction of Kwang Road and Chao Fa West Road (map here), soon after 8pm.

The victim was driving a white Chevrolet Captiva when the execution was carried out. Police have yet to release details of the woman’s identity, but she is believed to have been travelling northbound when the attack occurred.

Rescue workers at the scene confirmed that the woman was killed by a single shot to the head through driver’s side window.

After the attack, the vehicle continued at speed and came to rest only after crashing into a street lamp by the side of the road.

Police at the scene are contending with a crowd of onlookers gathered at the site.

At latest report, police have blocked northbound traffic along Chao Fa West Road, a major road linking the southern beach areas of Phuket with Phuket Town and the airport, in order to search for the bullet casing.

Motorists are urged to avoid the area.

Tonight’s murder – like Sunday’s mass robbery at a Karon Beach resort, in which about 20 tourists had their passports, cash and other valuables stolen – comes while hundreds of officers have been posted on the island to boost safety in Phuket through a ’30-day blitz’ on crime (story here).