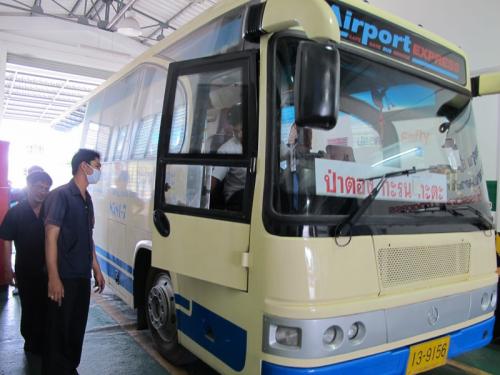 PHUKET: In what seems to be the last shuffle of dates for the launch of the long-awaited Phuket Airport Express bus service, wheels are now to be rolling by July 19, operator Prakob Panyawai confirmed to the Phuket Gazette.

“The airport buses will be ready to run on July 19. We thought we could start on July 15, but we had to delay it for a few days,” Mr Prakob, the owner of the bus operating company, said.

“We have finished the graphic art for the posters to be displayed at the bus stops and sent it to a shop for printing,” he said.

“However, the final details of the marketing campaign are still being drawn up. All this should be finished by this week,” he added.

The bus stops will be at:

• Phuket Airport: under the pedestrian bridge to Terminal 2

• Muang Mai: in front of the Highway Police checkpoint

• Kow Kaew: in front of the Boat Lagoon

• Bypass road: to be confirmed – will be either in front of Thanachart Bank before the Samkong Intersection, or in front of Billion Plaza on Phra Phuket Kaew Road (heading to Patong)

• Thung Thong: in front of the Caltex gas station

The buses will be at the market for only 10 minutes before departing and will not be allowed to pick up people from anywhere else in Patong.

“We will work on our marketing to let people know that we are about to launch the service,” Mr Prakob Panyawai said.

“We will start the service with six buses and just go from there,” he added.