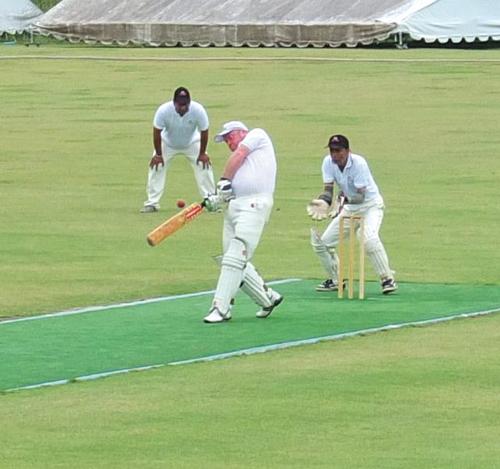 PHUKET: THE Outrigger T20 league kicked off at the ACG cricket ground last Sunday with an action-packed double header.

After a disappointing showing in the recently completed senior league season, the Village team had been hard at practice, keen to prove themselves. After being put into bat, all the hard work seemed to pay dividends, with the Village posting 176-6 from their 20 overs. Openers Martin Foster (30) and captain Paul Stamp (69) posted an impressive 99 run partnership, with Stamp particularly punishing, smashing five sixes and five fours from just 42 balls.

The momentum slowed shortly after this, with ICC fighting back to claim several more wickets cheaply until Diwan Mydeen (28 not out from 14 balls) came into the middle to bring the innings home. The hard-to-beat total of 176 runs was aided by some wayward bowling from ICC which included 20 wides.

After the break, ICC knew a run-rate of more than eight runs per over was going to be a difficult but not impossible task. However, they got off to a shaky start, losing opener Ravi Naik (7) in just the third over with the score at 15. Stalwart Surender Kumar (19) and Vikram Sharma (26) steadied the innings until Kumar fell.

Apart from Deepak Mehra (13) and A Mushtaq (10) no other ICC batsmen managed to reach double figures and could only manage 122-9 in return, with Diwan Mydeen and Craig Murphy both claiming a treble of wickets each. The Village claimed a decisive victory.

In the afternoon session, Patong took on defending champions Laguna, keen to redeem themselves from their loss to Laguna in the JLL Hotels league final.

After winning the toss, Patong elected to bat first hoping to set a high-scoring total to defend. They got off to a solid start with openers Mike Khan (17) and Seemant Raju (37) putting on a 38 run partnership before Khan fell in the seventh over.

However, none of the remaining Patong batsmen managed to reach double figures as they limped to post a total of 100-9 from their 20 overs. This was mainly due to an impressive bowling display from Sami Ullah (four wickets for eight runs), who was well supported by the other Laguna bowlers which was also backed up in the field.

When Laguna took to the crease, they got off to a quick start with openers Darren Shaw (26) and captain Stuart Reading (20) scoring at 10 runs an over until Reading fell with the score on 44 in the fifth over.

Roly Cooper (18) also looked impressive until he was bowled by Raju with the score on 80. Val Guiraud (10 not out) and Damian Clowes (nine not out) then guided the innings home to reach 101-4 in 16.1 overs.

Play commences at 10:30 am and all are welcome to come along. For more information please click here.