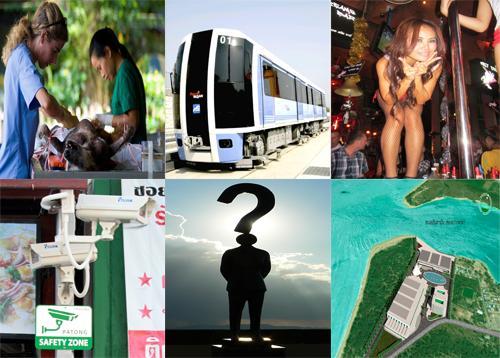 PHUKET: In response to the 2.6 billion baht that remains unaccounted for after Deputy Prime Minister Plodprasop Suraswadi last month confirmed that Phuket will not be bestowed an International Convention and Exhibition Center “unless they vote for Pheu Thai” (story here) – readers of the Phuket Gazette have opted to have a light-rail system built instead.

The latest Phuket Gazette online poll asked readers: “For Phuket, what would you spend 2.6bn baht on if it were sitting in your living room in cash, shrink-wrapped, and ready for delivery?”

Overall, 44.2% of respondents voted for establishing a light-rail system.

Thai nationals were the strongest supporters of the idea, with more than half of the Thai respondents voting for it.

Local foreign residents and tourists – all apparently seeing the advantages of the system – joined the call, making it their top choice also.

Despite the general optimism toward the choice, Phuket Gazette reader “Nemo” questioned whether or not 2.6bn baht would be enough to satisfy most readers’ dreams of a light-rail system.

“Light rail systems typically cost about US$22 million (670 million baht) per kilometer, so you would only buy 4 kilometers for 2.6bn baht,” Nemo wrote in the Gazette Forum.

“There is no corridor on Phuket that would attract enough passengers to fill even a small fraction of the capacity provided by a rail system. The obvious alternative is a network of bus routes [story here] which would cost nothing. If they were properly planned and managed, they would cover their full costs.”

A reasonable second-place finisher in the poll, garnering 31.9% of votes, was the choice to set up extensive, effective environmental protection measures.

The environment-priority option saw the greatest amount of support from local foreign residents, with about 35% of the field making the choice. Trailing not far behind were tourists, voting at 29%. However, the option was able to amass only 16% of Thai nationals’ votes.

The choose to install island-wide CCTV systems and boost Phuket’s police force received significantly lower support from all groups, receiving only 10.5% of votes.

Tourists were the heaviest supporters of the initiative, which can be seen as supportive evidence for the local government’s recent showing of brass on Soi Bangla (story here).

The other three options presented – solving the island’s stray dog problem; developing a Phuket Night Entertainment Super-Mega-Plaza; and launching a Phuket blimp – were all hovering at only about 4% at the time the poll was closed.

The choice to keep a Phuket blimp afloat was able to hang with the other stragglers due to the interest of local foreign residents and tourists only, as the gas bags received no support at all from Thais.

To take part in the Gazette‘s newest poll, click here.