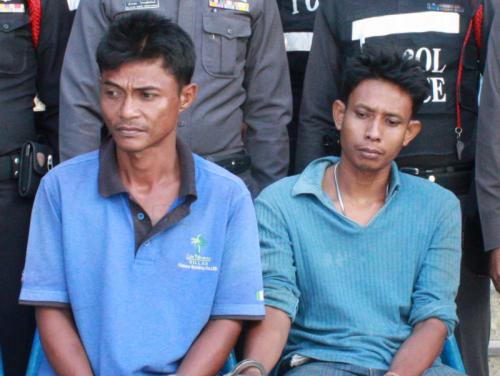 PHUKET: Police have arrested two suspects for the murder of the Thalang motorcycle taxi driver whose body was found in a canal in central Phuket yesterday (story here).

“Our investigation led us to discover that the day before Mr Thammanoon’s body was found, Mr Chakrit and Mr Thammanoon had gone together to the Bank of Ayudhya branch at Tesco Lotus Thalang [map here] to withdraw 50,000 baht from Mr Thammanoon’s account,” Col Sirisak.

Recalling the events that led to Mr Thammanoon’s death, Mr Chakrit told the press, “Later Thammanoon and I went to drink at a karaoke bar in Srisoonthorn and after that continued drinking at my house in Baan Riang, near the Thalang Victory Memorial Field.

“After drinking for a while, we called Prasit to join us,” Mr Chakrit said.

“At around 6pm, Thammanoon and I had an argument. He started insulting my parents, and it made me so furious that I grabbed a metal rod and hit his face twice,” he added.

“He fell unconscious to the floor, so me and Prasit carried him to my pickup truck. We took all his money and valuables and drove to the canal near my house and threw him into it,” he explained.

“Prasit and I tried to get rid of all the evidence. I went and got Thammanoon’s new motorbike, which we had left at the karaoke bar, and Prasit rode Thammanoon’s old bike to Khok Kloy in Phang Nga and left it in a rubber plantation there,” he explained.

“We were close friends. Whenever we drank together, I always paid for Thammanoon. This time I just couldn’t control my anger,” Mr Chakrit confessed.

Seized as evidence during the police investigation were Mr Thammanoon’s brand-new Honda Wave motorbike as well as a black Honda Wave motorcycle, a gold necklace valued at about 20,000 baht, 50,000 baht cash, a 65cm-long metal rod, a black Nokia mobile phone and five pills of ya bah (methamphetamine).

Both Mr Chakrit and Mr Prasit have been charged with robbery and murder, Col Sirisak confirmed.

Mr Prasit faces an additional charge of possession and use of Category 1 narcotic, he added.