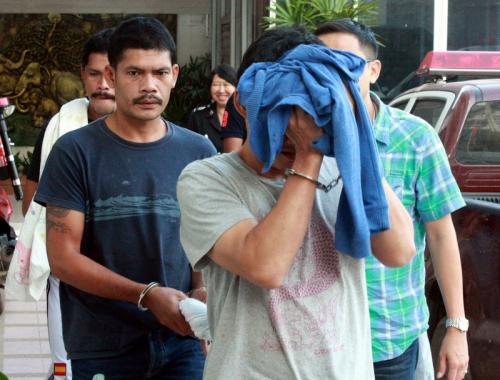 PHUKET: The two Thai men arrested for their involvement in the attack on a Kedah royal family bodyguard at a hotel in Patong on Tuesday night claim that though they were at the scene, they had no prior knowledge that the attack would occur.

The bodyguard, Mohd Sobri Bin Said, suffered bruising to his body and a serious wound to his head that left him bleeding profusely when he arrived at Patong Hospital (story here).

Following a manhunt that swept across Southern Thailand, police arrested five suspects, who were all brought to Phuket yesterday for questioning at Patong Police Station (story here).

“They have been charged with robbery and assault,” Phuket Provincial Police Commander Choti Chavalviwat confirmed to the Phuket Gazette this morning.

“Prakong Seesopha said he and his older brother, Sakorn, did not know that the two Malaysian men, The Lai Chay and Hing Yam Shiong, planned to attack the Kedah royal family bodyguard,” Maj Gen Choti said.

“Prakong claimed that he and his brother just drove the two Malaysians to the hotel, followed them inside and entered the room,” Gen Choti explained.

“The Malaysians told them they were waiting for their friend in the room. They did not turn the light on because they wanted to surprise their friend. But when the door opened and someone walked in the room, the two Malaysians started the attack,” he said.

Sakorn even claimed that he was pushed into the bathroom, so he did not know what was going on in the room, he added.

“Although Prakong and Sakorn declined any involvement in the assault, they are wrong in that they did not try to stop the fight or report it to the hotel staff or police. They agreed to help the Malaysians in hiding it,” affirmed Phuket’s top-ranking police officer..

“While we are investigating and collecting evidence, the five suspects are being detained at Phuket Provincial Prison,” he added.

Gen Choti said that he had not yet received a full report on the case.

“Our officers are still conducting their investigation,” he said.

Phuket tourists, divers to be warned off damaged coral zone