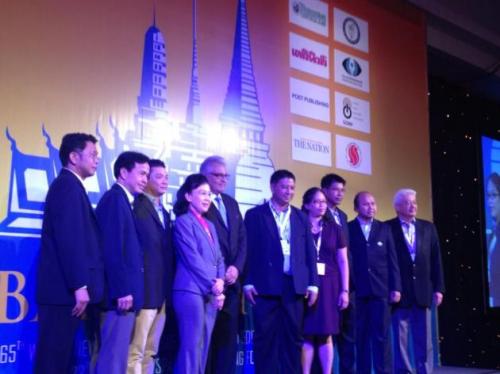 
Newpaper chiefs confer on challenges facing industry
The Nation / Phuket Gazette
PHUKET: Global newspaper chiefs are here in Bangkok to confer on the big challenges that face the industry, which include poor press freedom and financial struggles.

At the International roundtable entitled ‘The New Media Landscape and its Press Freedom Challenges” yesterday, the audience was told that Southeast Asia is still a “sad story” when it comes to press freedom while a number of African countries pose serious challenges for working journalists.

From the African continent, Ferrial Haffajee, editor of City Press in South Africa, said problems ranged from jailing of journalists in Ethiopia to the state of emergency in Nigeria. In the Democratic Republic of Congo, said Haffajee, the country has become a no-go zone for journalists and other countries in the continent including North and South Sudan, Zimbabwe and Somalia are difficult for journalists to operate in.

Kavi Chongkittavorn, columnist at The Nation and chairman of the roundtable, said press freedom in Southeast Asia still has a lot of problems, including the lese majeste law in Thailand. The region, he said, is like a Disneyland of political systems due to the wide range of governance methods.

The event was part of the four-day 65th anniversary of the World Newspaper Congress. The annual summit meeting of the world’s newspapers and news publishers, organised by the World Association of Newspapers and News Publishers (WAN-IFRA), ends on Wednesday.

The congress started with a roundtable discussion on digital media, where panellists agreed that newspapers across the world would need to go digital, encompassing websites, smart phones and tablets to meet the needs of the consumers. Through the digital platforms, they can seek revenue from online subscription and advertising.

Stig Nordqvist, an executive director for Publishing & Digital, WAN-IFRA, said that the consumption of news will soon be as big on mobile as on laptop and PC, while print circulation and advertisement is rapidly decreasing in mature markets. Supporting this is a change in consumer behaviour as well as structural change in advertising strategy to cover new media.

Media publishers without healthy online business are extremely weak, and increasing the digital focus is key for building business. Nordqvist said that leading publishers are now heading to generate more than 50 per cent of revenue from digital platforms. For this, newspapers need a proper data management system to manage and balance their customers and advertisers.

Anders Berglund of Schibsted Media group Sweden urged news organisations to adopt the real-time bidding (RTB) model, as this will be the next big thing for online media. RTB is an automated process that allows online bids and purchases by media buyers.


Isolated schools may not have to merge
The Nation / Phuket Gazette
PHUKET: The Education Ministry will provide further assistance to small schools that are unable to merge with larger ones, due to their isolated locations, said Education Minister Phongthep Thepkanjana, following recent discussions with locals in Chiang Rai’s Muang district.

During his visit to the province he paid a visit to a small school – a branch of Pha Khwang Witthaya School – which provides education for up to 39 students. Despite having only 39 students, the school will not be merged as it serves students in an isolated mountainous area, said Phongthep, who talked with locals and discussed ways to keep the school open.

The school’s administrators revealed that they lacked the resources, but stressed it was crucial to keep it open for the students.

“The Education Ministry will provide the school with more resources for the sake of the students. The school will be equipped with a satellite for distance learning and temporary teachers will be assigned to teach subjects with which local teachers are not so familiar. Locals will also take part in passing on their wisdom – such as weaving and basketry – so that students can apply them in their working lives,” Phongthep said.

Responding to opposition against the school-merging policy, Phongthep insisted that it was to improve the quality of education and was not just aimed at closing down small and inefficient schools.

However, he said those schools that could not be merged due to their isolation, would receive assistance from the ministry in the form of educational planning and temporary teachers, who would travel to the schools to teach subjects like mathematics and English.

Surajate Palee, director of Pha Khwang Witthaya School, said one of its school branches – Khwae Wuadam – was in a mountainous area where the Karen and Lahu tribes lived. He said it was too isolated for students to travel to another school and the parents were also too poor to pay for their children to attend schools further away.

Prathom 5 students often had to wait until Prathom 6 students finished their more advanced lessons before joining the class. This, he said, meant that the teaching process was much slower than in schools with proper resources. As a result, the school’s national test scores were well below the national average, he said.

Naji Ja-nga, 48, a mother, said the school branch helped provide her child with some education. She did not want it to be closed down and said the ministry should instead provide it with more teachers, books and equipment.

Nako Waku, a grandma of a student at the school, said she did not want her niece, still in primary education, to have to travel far as she was still too young.

Police were investigating the gruesome findings. After first finding10 bodies, they then found one more off Koh Chang in Ranong’s Muang district.

Police suspect they were among dozens of people from Myanmar whose boat capsized and sank on May 31 as they were travelling from Koh Song.

Thirty-eight people from the boat survived and were detained by Thai authorities for illegal entry, as they had no travel documents.