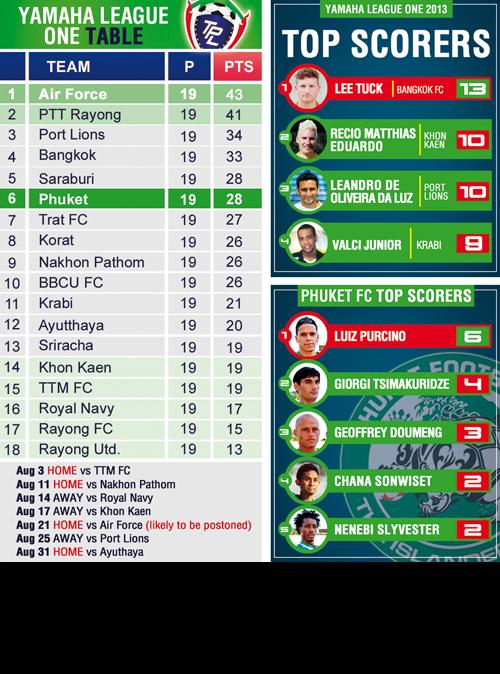 PHUKET: After a two-week hiatus, Phuket FC’s skillful Japanese defender Yusuke Sato has fully recovered from a minor calf injury, confirming that he is ready to return to action, starting with two important, upcoming home fixtures.

The 6th placed Islanders will host the 15th placed Thai Tobacco Monopoly Football Club tonight (click here for map), which will be followed by another home match next Sunday, August 11 against Nakhon Pathom United.

“I’ve been training real hard and am ready to play and determined to win. We cannot afford any losses, or even draws, in order to go to the Thai Premier League (TPL),” he told the Phuket Gazette.

Yusuke, 31, is now going into his fourth month of a two-year contract with Phuket. Last year, he played a major role getting his then-division 2 team, Rayong United promoted from the highly competitive Champions league playoffs.

Before that, he was part of the 2011 Chainat FC squad that gained promotion to the TPL from Thai Division 1 (now Yamaha League One or YL1) after finishing second in the league, behind Buriram.

“All of our matches in August will be important and tough. We cannot underestimate anyone, even the lower-ranking teams like TTM, Ayuthaya or Nakhon Pathom – who all have some new players and are strong teams… but we also have good players and a strong team,” he assured.

The Islanders got a strong injection of confidence last Thursday after making minced meat out of local college outfit, Rajbhat Phuket “Locomotive”, winning 9-0 in a friendly match at Thanyapura Sports and Leisure Club in Thalang (click here for story).

The result was achieved even without key players Yusuke Sato, French midfielder Geoffrey Domeng and Ivorian defender, Nenebi Sylvester, who underwent light training on the sidelines.

After the TTM match, Phuket will have at least five more matches to play in August.

Initially, their schedule comprised seven matches for the month, but their home match against top-of-the-table Air Force United, initially scheduled for August 21, will most likely be postponed.

Meanwhile, the transfer window has officially closed, with the team announcing 11 new players, though 11 players leaving the outfit (see below).

Club president Pamuk Achiri-yachai said that although getting promoted to the TPL will prove difficult, all players must give it their all in the remaining matches.

Phuket fans need faith, support and unity, which he identified as the keys to the club’s success.

*Phuket FC also signed Watcharapol Sutidee from TTM, but immediately loaned him out to Division 2 side, Udon Thani FC.