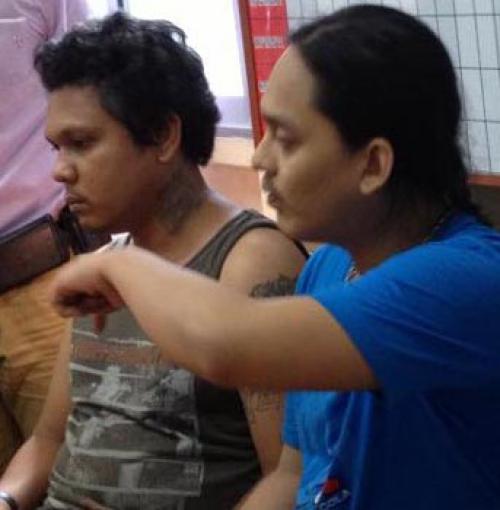 PHUKET: Adam Carter, the 27-year-old American who was stabbed by Thai musicians in a bar fight that resulted in the death of his father (story here), has been discharged from hospital in Phuket.

“He was discharged from Bangkok Hospital Phuket yesterday evening and was brought to Krabi,” Col Boontawee explained.

“He appears physically okay now, seeing as the doctors allowed him to be discharged, but is still distressed. Nevertheless, we need to question him more about the whole sequence of events. The investigation will need to be fair to both sides,” he added.

Col Boontawee said his officers had reviewed CCTV footage of the incident recorded at the Longhorn Saloon Bar in Ao Nang, one of Krabi’s most popular bayside resort towns for tourists.


Video provided by Tomo News and Next Media Animation.

“We saw the pair [Adam and his father] join the three musicians on stage. Then the pair did not leave the stage, despite being asked to, and it was clear from the footage that the father opened the tip box, grabbed money from it and threw it to the floor before the pair left the stage,” Col Boontawee said.

“When the pair met the musicians outside, another altercation ensued. However, this fight was out of CCTV range, so we were not able to see the video evidence of the fatal stabbing.”

One of the three suspects, Ratikorn Romin, 27, was released on bail by the Krabi Court today.

The other two men – Sathid Somsa, 40, from Bangkok; and Nopanan Yoddecha, 26, from Krabi – remain in detention at Krabi Provincial Prison, Col Boontawee told the Gazette.

“The suspects admitted to attacking the pair, but said they didn’t intend to kill anyone,” he added.

“The attack will likely affect Krabi tourism considerably. This is undeniable. It is a sensitive issue, especially since the story has now been published overseas.” Ms Wiyada said.

“As this is a criminal case, due process of the law must be followed. However, Krabi TAT will do its best to support Mr Carter at this extremely difficult time,” she added.

Only way is up for Phuket FC