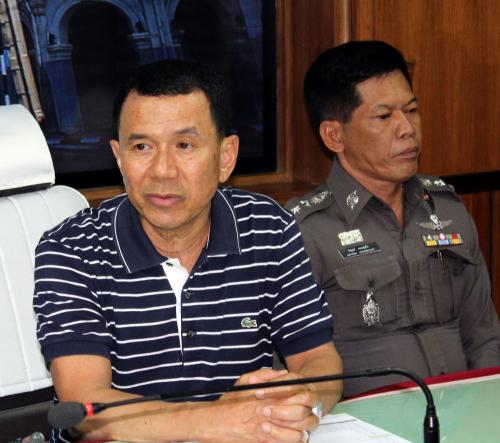 “The bomb appeared to be quite amateurish. We have already delegated key investigative roles to specific officers – to ensure we catch the culprit as soon as we can,” Gen Ratchata said.

After having been briefed by Phuket officials, Gen Ratchata admitted that though the explosion was thought to be designed to frighten officials, the motive for attempting to inspire that fear was still unclear.

“I have ordered Phuket Provincial Police and Phuket City Police officers to investigate the case as assiduously as they can,” Gen Ratchata told the Phuket Gazette.

“Phuket Provincial Administration Organization officials and any witnesses must be questioned thoroughly, especially anyone who claims that they might have seen the bomber.”

Deputy Commander of the Phuket Provincial Police Saneh Yawila confirmed to the Gazette yesterday that security has been increased at Provincial Hall for the time being (story here).

Only way is up for Phuket FC

Phuket out of TAT promotional campaign for 2014