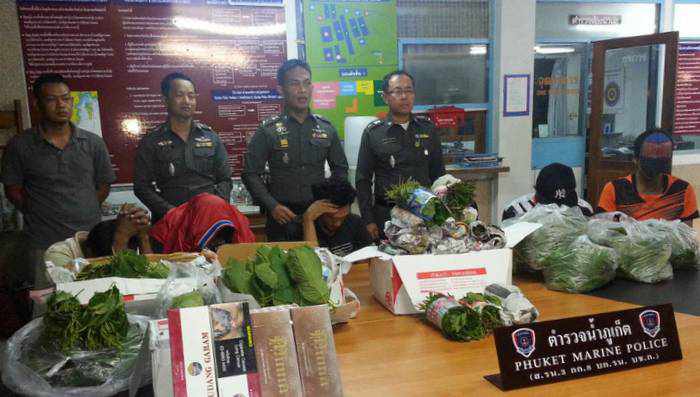 PHUKET: Police arrested eight men over a two-day period as they collected boxes containing kratom from a Phuket post office.

Suspicions were aroused when seven well-wrapped boxes, all the same size and all about the same weight, arrived on the same day from Bangkok.

“One of the staff at the Phuket Post Office notified us and we sent plain clothes officers to wait for the recipients to pick up the boxes,” said Lt Col Chatchai Sakdee of the Phuket Marine Police. “When they did, we presented ourselves and asked to search the boxes.”

On Tuesday, three pairs of men came to retrieve the packages.

The first arrived at 12:30pm. Saka-riya Deu-rae, 29, and Mapandee Madeeyoe, 25, claimed three.
When police searched the boxes, two of them, weighing a total of 10.2 kilograms, were found to contain kratom leaves and the last held four cartons of illegal cigarettes.

Yesterday the last box, which weighed 5kg and also held kratom leaves, was claimed by Usaman Kayaedalae, 23, and Muyat-deedee Dorlorh, 22.

Each box carried the name of a different sender; but none of the names showed up in the national ID database, leading police to conclude they were fake.

“The suspects have been transferred to Phuket City Police Station. We will question them to determine who the sender is,” Col Chatchai said.

Kratom trees are native to Southeast Asia. However, their leaves have been designated a controlled substance, in the same category as cannabis, since promulgation of the Kratom Act in 1943.