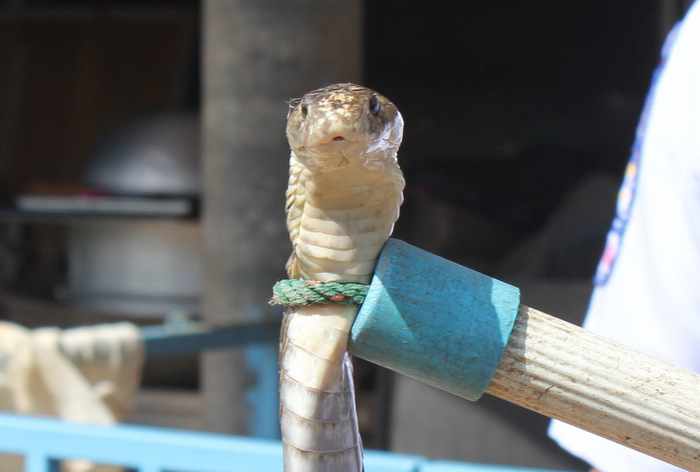 PHUKET: A man sweeping in front of his house in Rassada, north of Phuket Town, yesterday afternoon stood and watched as a brazen three-meter cobra slithered out from under a bush to rest in the shade on his front porch.

Rescue workers from the Kusoldharm Foundation, who are well practiced in catching and releasing snakes found near homes throughout Phuket, were called to remove the reptile from the house in Soi King Kaew.

“The man was scared. He didn’t know what to do, so he called his son, who called us,” rescue worker Watchara Srikacha told the Phuket Gazette.

The pair of rescue workers took only a few minutes to catch the snake, he said.

The cobra was bagged and later released at an undisclosed jungle location.

“I urge everyone in this type of situation not to do anything to antagonize a snake,” Mr Watchara said.

“If you don’t have experience catching snakes, please call us. We are available around the clock.”

The Kusoldharm Foundation can be reached at 076-246301 (24 hours). It’s recommended that callers be able to speak some Thai.

New Catholic church soon to be consecrated in Cherng Talay