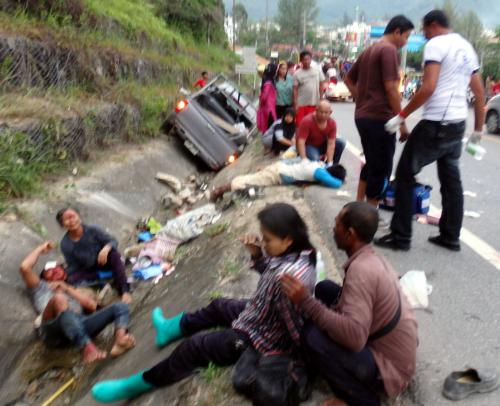 PHUKET: A truck carrying construction workers flipped on a hill on the coast road between Patong and Kamala yesterday, killing one and injuring 12.

Kamala Police were notified of the accident at about 5:30pm. By the time they arrived at the scene, traffic police were already there, helping to direct traffic in the long tailbacks building up at the crash site.

“We found an Isuzu pickup truck had crashed into a deep drainage ditch, and more than 10 injured people were strewn across the road,” Investigator Navin Petchjan of the Kamala Police said.

One of the eight ethnic Mons injured in the accident, Mr Chad, succumbed to his injuries after being transferred to the better equipped Vachira Phuket Hospital.

“I was taking the workers from Patong toward Kamala, as usual, but when I arrived at the down slope of the hill, it was too steep and I couldn’t brake,” the 51-year-old driver, Mhad Kawiset, said.

Mr Mhad was charged with reckless driving resulting in death.

“The crash might have been caused by brake failure, but we will investigate in order to confirm the true cause of the accident,” Lt Navin said.

Vachira Hospital staff confirmed to the Phuket Gazette that two patients had been transferred to the hospital. However, they declined to comment further.

Letter from the Phuket Governor: Improving the island step by step, his way

Phuket Poll: Is compulsory health insurance for tourists worth it?