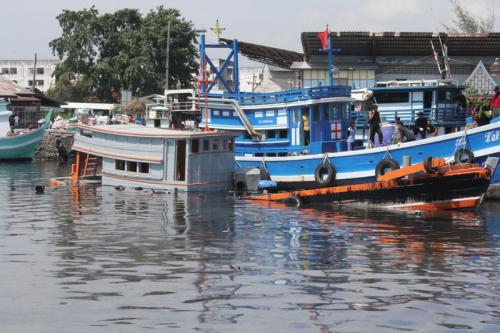 PHUKET: Marine Police scrambled this morning to contain an oil spill from an abandoned illegal tanker that sank in the Tah Jeen Canal on the east side of Phuket Town last night.

The sunken boat, modified into an illegal tanker with the capacity to hold an estimated 20,000 liters of diesel oil, was spotted by local villagers at about 7:30am.

“We called in another tanker, the Chok Thavorn 11, which recovered about 10,000 liters of oil from the sunken boat,” Phuket Marine Police Deputy Inspector Jeerayuth Onthong told the Phuket Gazette.

To stop the oil slick from spreading into the canal, which separates Koh Sireh from Phuket, the team of officers installed a containment boom around it.

Officials have yet to estimate how much oil leached into the canal, at the mouth of which sits the busy Rassada Pier (map here), Phuket’s main jump-off point for tourists heading to Phi Phi Island.

“Local residents told us the boat anchored there last night. It’s likely the boat started taking on water still at sea, so the captain would have brought it into the canal to fix it,” Lt Jeerayuth explained.

“He probably abandoned the boat once he realized he couldn’t salvage the boat or the oil,” he added.

Phuket Marine Office records identify the sunken vessel as the Premika, registered as a fresh water tanker owned by Teerakrit Suesakul, from Rassada.

“We have identified the boat and the owner, but we have yet to find him,” Phuket Marine Police Inspector Chatchai Sakdee told the Gazette.

Lt Col Chatchai explained this was not the first time the Premika had been found illegally carrying diesel oil.

“We checked our files and found that the boat was seized two times in 2011. Both times were at the Deep Sea Port,” he said.

“The first time it was seized while illegally carrying 20,000 liters of diesel oil. The second time it was caught with 40,000 liters,” Col Chatchai added.

Lt Jeerayuth explained that if a boat is caught illegally transporting oil, the boat owner will be fined. If he can’t pay the fine, he faces imprisonment.

“Once you pay the fine, the case if finished,” he added.

Phuket Sports: Trouble on the terraces