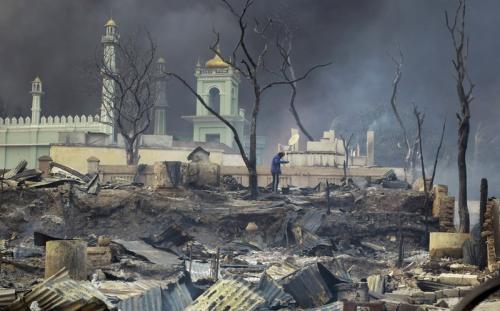 
Myanmar riots stoke fears of widening sectarian violence
Reuters /Phuket Gazette
PHUKET: Unrest between Buddhists and Muslims in central Myanmar has reduced neighbourhoods to ashes and stoked fears that last year’s sectarian bloodshed is spreading into the country’s heartland in a test of Asia’s newest democracy.

Five people, including a Buddhist monk, have been killed and dozens wounded since Wednesday, state media reported. Other authorities put the death toll at 10 or higher.

The unleashing of ethnic hatred, suppressed during 49 years of military rule that ended in March 2011, is challenging the reformist government of one of Asia’s most ethnically diverse countries.

Jailed dissidents have been released, a free election held and censorship lifted in Myanmar’s historic democratic transition. But the government has faced mounting criticism over its failure to stop the bloodshed between Buddhists and Muslims.

“I am really sad over what happened here because this is not just happening to one person. It’s affecting all of us,” said Maung Maung, a Buddhist ward leader in Meikhtila.

Hundreds of Muslims have fled their homes to shelter at a sports stadium, said local officials. The unrest is a bloody reprise of last year’s violence in Rakhine State in western Myanmar, which officially killed 110 people and left 120,000 people homeless, most of them stateless Rohingya Muslims.

Locals complained there were too few police in this city of about 180,000 people to subdue the unrest. It erupted after an argument between a Buddhist couple and the Muslim owners of a gold shop spiralled into a riot involving hundreds of people, said police.

Reuters saw some Meikhtila residents arming themselves with knives and sticks in an eerie echo of the Rakhine violence in 2012, when pitched battles between the two communities later morphed into orchestrated attacks on Muslim communities by organised gangs of ethnic Rakhine Buddhists.

“Religious leaders and other community leaders must also publicly call on their followers to abjure violence, respect the law and promote peace,” Vijay Nambiar, U.N. special adviser of the secretary-general, said in a statement.

Myanmar is a predominantly Buddhist country, but about 5 percent of its 60 million people are Muslims. There are large and long-established communities in Yangon and Mandalay, Myanmar’s two largest cities, where tensions are simmering.

“Everyone is in shock here. We never expected this to happen,” said a Muslim teacher in Mandalay, requesting anonymity.

Rumours that violent agitators were heading for the city had set its Muslim community on edge, he said. Buddhist monks known for their anti-Islamic views last year staged several street protests in Mandalay.

In Meikhtila, at least one mosque, an Islamic religious school, several shops and a government office were set alight, said a fire service official, who declined to be named. Reuters saw both Buddhist and Muslim homes burned.

Sectarian unrest is common in central Myanmar, although reports were stifled under the military dictatorship.

Three people died in Sinbyukyun in 2006 when Buddhists attacked homes and shops belonging to Muslims and ethnic Indians, according to a U.S. diplomatic cable.

“The incident reveals underlying tense inter-ethnic relations in the heartland,” said the cable, which also referenced similar communal riots in Kyaukse, a town near Meikhtila, in 2003.

Resources Minister Martin Ferguson said he would step down, joining departing Cabinet colleagues Simon Crean and Chris Bowen, as well as junior minister Kim Carr. All had backed Gillard’s chief rival Kevin Rudd as the party’s best hope to reverse polls pointing to a thrashing by conservative opponents at the September 14 elections.

“I have a view it’s the only honourable thing to do. I would have voted for Kevin Rudd yesterday and Simon Crean to try and give this party a fresh start,” an emotional Ferguson told reporters at parliament in Canberra.

The political unrest in the country threatens to cloud decision making with elections just six months away and as the minority government readies to take leadership of the G20 and after Canberra became a rotating United Nations Security Council member.

Gillard stamped her authority on Labour by being re-elected unopposed after Rudd conceded he did not have the numbers to topple her after a tumultuous day of backroom plotting that will do even more damage to the government’s fading popularity.

Treasurer Wayne Swan, widely derided by voters despite having steered the Group of 20 wealthy nations member through the last financial downturn with 5.4 percent unemployment and a 21st year of unbroken economic growth, was re-elected as Gillard’s deputy.

Crean was sacked immediately by Gillard on Thursday for backing Rudd in what newspapers called a political “suicide bombing” that appeared to have delivered no gains for Labour except the near-certainty of a thumping election defeat.

Rudd, a Mandarin-speaking former prime minister ousted by Gillard in 2010 amid another round of plummeting polls, said on Friday he would never again run for the leadership – unless it was already vacant.

“I don’t think it’s worth raking over the coals. What’s done is done and let’s get on with the future,” Rudd said. “It’s really important that we bind together and that’s what the Australian people expect of us.”

Bowen, one of Rudd’s key backers and a former immigration minister, said he would also quit, stripping Gillard’s top ranks of another of its most effective political talents.

Ferguson, in particular, had been an influential advocate for the country’s mining industry and helped broker a 2010 deal with major resource companies including BHP Billiton and Rio Tinto to abandon a damaging campaign against a mining profits tax introduced by Labour and later watered down.

Gillard, the plain-speaking daughter of Welsh migrants, has consistently failed to arrest a slump in opinion polls, which predict a major defeat in September with Labour losing about 20 seats in the 150-seat parliament.

But she attempted to draw a line under the divisions and concerns about her leadership, extending a press conference at a road construction site north of Sydney on Friday to face down questions from journalists about the government’s stability.

“This issue is over and done with. This issue has been resolved for all time, and I think Kevin’s stateme