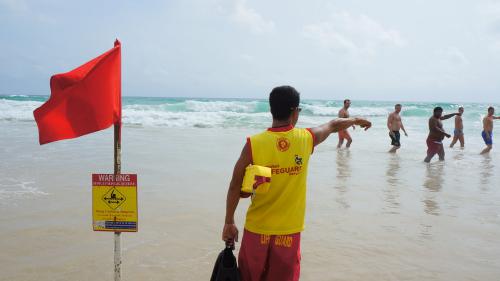 PHUKET: A Norwegian tourist drowned after being caught in heavy surf at Karon Beach, on Phuket’s west coast, yesterday.

“There were big waves, up to about two meters high,” Mr Uten told the Phuket Gazette.

A tourist swimming near Mr Hangsao raised the alarm after spotting the man floating face down in the water.

“We rushed to help him and brought him back to the beach,” Mr Uten said.

“We spent 20 minutes giving him CPR [cardiopulmonary resuscitation], but he remained unconscious. We rushed him to Patong Hospital, but it was too late,” he said.

Karon Beach (map here) has gained a notorious reputation for surf safety over the years. The tourist-popular beach is prone to large waves and dangerous rips during the southwest monsoon season.

Late last month, two tourists drowned within hours of each other at Karon Beach (story here).