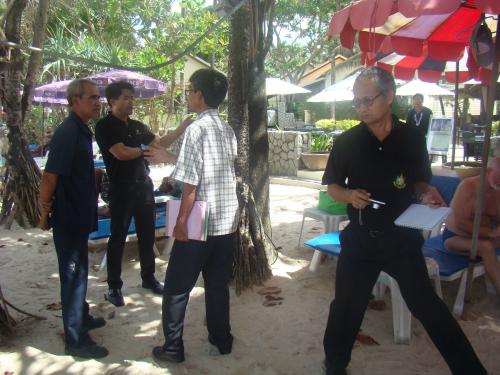 PHUKET: A leading Phuket resort has been ordered to remove a pipe that released runoff rainwater directly onto the sand at Patong Beach.

The news came yesterday when officers from the Regional Environmental Office (REO) and Patong Municipality inspected the Impiana Resort, on the Patong beachfront road (map here).

“We asked people in the area, and were told that the hotel installed the pipe at the request of beach chair operators in front of the resort,” REO inspection officer Khanchit Soontrakorn told the Phuket Gazette.

“Every time there was heavy rain, the rainwater flowed down from the resort onto the beach, right where the operators rent out beach chairs,” he said.

“Often, there was so much rainwater that it formed huge puddles in the sand, which didn’t look nice, so the beach operators asked the hotel to try to do something about it,” he explained.

Mr Khanchit said that his officers tested the water coming out from the pipe and confirmed it was not wastewater.

“The water coming out of the pipe formed a light foam, which indicated some form of detergent was being carried out with the rainwater, so the hotel agreed to remove the pipe and install a separate chamber to collect rainwater runoff from the resort’s swimming pool terrace,” Mr Khanchit said.

“A pump will be installed to empty the water from the chamber into the hotel’s main wastewater drain when the chamber is full,” he explained.

“We will return next week to make sure the pipe has been removed and that the runoff chamber has been installed,” Mr Khanchit added.

The inspection yesterday came after REO chief Dr Pornsri Suthanaruk received a complaint, with photos of the pipe, from a Phuket expat.

“Thank you for notifying us about this. If anyone sees wastewater, or any other form of pollution that needs action, please take photos and report it directly to us by calling 076-219329 or 076-219415,” Mr Khanchit said.