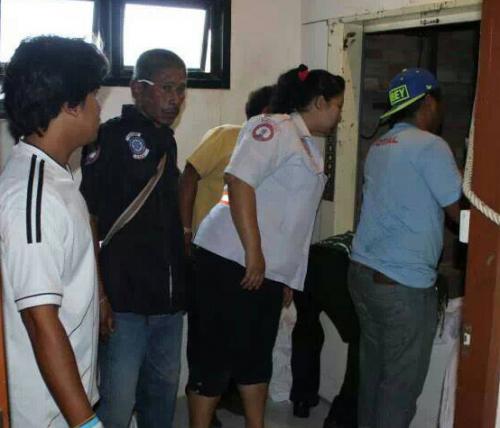 PHUKET: A hotel maid died at a Phuket resort yesterday afternoon when her neck was broken by a service lift being activated while she was leaning inside, trying to retrieve a clothes iron.

Karon Police arrived at the Phuket Peach Blossom Resort in Karon to find the body of Jaruwan Prasit, 21, inside the lift shaft, lying on top of the service elevator.

“When the service lift arrived, she started unloading bedsheets, pillowcases and other stuff. She was almost finished unloading, she only had to get the iron,” one maid told the Gazette.

“While she was trying to reach the iron, the lift accidentally started going down and she was pulled down with it,” the staffer said.

“We are so sorry that we could not help her at all,” she added.

Anurak Chuaysri, Executive Assistant Manager at the resort, told the Gazette the tragedy has taken its toll on their staff.

“This has deeply saddened everyone here. The service lift has been shut down and we have contacted our elevator maintenance crew to inspect the lift and make it safe.

“We don’t want any more incidents like this, or our staff being put at risk,” Mr Anurak said.