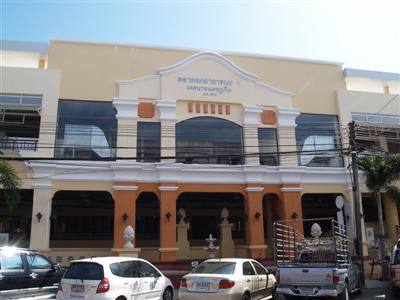 PHUKET TOWN: With the opening of the new market on Ranong Road on hold more than a year after its completion, would-be tenants have filed a complaint charging the municipality with overcharging them on construction costs needed to build food stalls.

Work on the project got underway in March 2007, after vendors agreed to move off the site of the old wet market.

The municipality then oversaw construction of a hygienic, state-of-the-art complex with facilities including elevators, rooftop parking and wastewater treatment equipment.

The completed project is a four-story building with a total area of 11,200 square meters surrounded on three sides by 27 commercial shophouse units.

By the end of September 2008, Phuket City Municipality had paid out the full 167 million baht in construction costs to the project contractor, but that did not cover the cost of stalls for each unit.

These are being built under a separate 25.7-million-baht contract, work on which began last month with scheduled completion in July.

Vendors are being asked to pay additional fees of 15,000 baht per square meter as well as material costs varying from 2,000 to 8,000 baht/sqm, depending on the type of stall.

Thus far not a single vendor has agreed to pay the fees, which they view as excessive.

As an example, one greengrocer is being charged over 540,000 baht for his designated area of just over 28sqm.

The vendors complained to the municipality before lodging a formal complaint with Phuket Governor Wichai Phraisa-ngop on April 8.

Gov Wichai arranged a meeting between them and Phuket Town Mayor Somjai Suwansupana the same day.

The municipality has asked the Bank of Agriculture and Agricultural Co-operatives (BAAC) to offer more attractive loan terms to vendors who cannot afford to pay, but the vendors are asking that the 15,000 baht/sqm fee be waived completely.

“Why do we have to pay when the market was built with over 167 million baht in taxpayer’s money? That should have covered the cost of building food stalls,” said one vendor representative.

The city also kept them in the dark about how much it would cost to move into the new market when the project was announced, they allege.

If the city refuses to negotiate on construction fees, they should at least offer low-interest loans directly to vendors, they said.

Monthly repayment on a 15-year BAAC loan at 7.5% annual interest would result in vendors having to pay back almost double the principal, the representative said.

Further problems lie in the fact that many vendors are too old to qualify for long-term loans, while others have been blacklisted due to a bad credit history.

“We are begging them for sympathy and not to place this hardship on us,” the representative said.

Mayor Somjai said the municipality will review the issue and announce its conclusions by the end of the month.