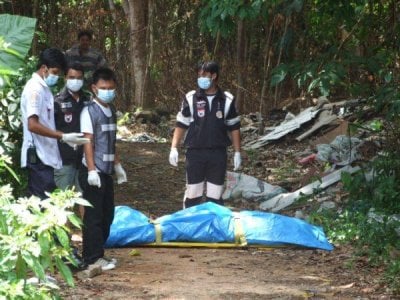 PHUKET TOWN: A 47-year-old man was found dead in a forested area just half a kilometer from the Phuket governor’s house.

On April 15, police were searching for evidence in an unrelated case when they discovered the body of Khamkong Yodsaeng from Udon Thani.

Duty Officer Chukiat Chaiwiset said it looked like Mr Khamkong had been dead for more than three days. He was identified by the ID card in his wallet.

There were no apparent wounds to the body, though the head was badly decomposed. Police are awaiting the results of an examination at Vachira Phuket Hospital.

Police found no evidence near the body and no one in the area said they knew him.

Lt Chukiat added, “It is hard to presume the cause of death, as there are many possibilities. We need to know more about his background first, such as what kind of person he was and what he did.”

Phuket tourist may be charged in jet-ski death