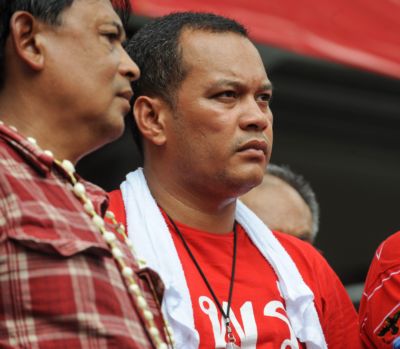 PHUKET: The ‘peaceful’ chaos ruling in Bangkok today cannot mask the kaleidoscope of tumbling loyalties or the withering away of any potentially credible justification that this is any longer (if it ever was) about a need for social change or the defense of democracy.

The risk is that the gathering acrimony from all sides is superceding ‘protest’ as the event itself, and that ‘face’ will become insurmountable in the quest for compromise and peace.

A sampling of today’s news:Armed Troops in heart of Bangkok

The troops assumed their positions yesterday, after the government declared the area, including the Silom Road thoroughfare, off-limits to the demonstrators.

AFP
Two bungled operations against “Red Shirt” protesters in less than a week may point to a split in Thailand’s military that has stymied Prime Minister Abhisit Vejjajiva’s government, analysts say.

Pavin Chachavalpongpun, research fellow at the Institute of Southeast Asian Studies in Singapore, said it was likely that some disgruntled commanders had begun to back Red Shirt protests.

“I have heard from my inner sources that there’s a split in the military, that some of the military men have defected to the Red camp,” he said.

The army draws most of its lower ranks from poor areas sympathetic to protesters, he added, and police are known to be fans of Thaksin Shinawatra, a former policeman. The nickname “watermelon” soldiers (green outside, red inside) has been coined to describe army sympathizers.

BBC
Thai yellow-shirt protesters, who oppose ex-PM Thaksin Shinawatra, have given the government a week to end the political crisis or face mass action.

The yellow-shirts, or, as they are formally known, the People’s Alliance for Democracy (PAD), held a meeting of some 3,000 supporters in Bangkok on Sunday.

PAD leader Chamlong Srimuang said: “We give the government seven days to return peace to the country or we, every member of the PAD, will perform our duty under the constitution.

“Prepare yourselves for the biggest rally when we will eat and sleep on the street again.”

New York TimesA new faction in Thailand’s color-coded protests, the “No Colors,” emerged on the streets of Bangkok during the past week, mostly middle-class demonstrators who are demanding that the government take action to restore order.

“We want our normal lives back,” said Tun Sittisomwong, an obstetrician and university lecturer who is leading the protests. “We want peace again for Bangkok and the country.”

The group, calling itself Civilians Protecting the Country, said that it supported the government and the military, but that the time had come to take strong action against the red shirts.

“The problem facing the country now cannot be solely solved by politics,” it said in a statement.

PHUKET OPINION: Learn to live with the gridlock