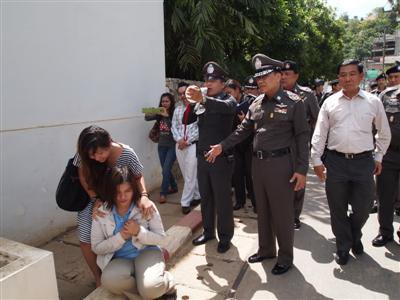 PHUKET: One of the most intensive manhunts in Phuket’s history continues as police scour the island for the two men responsible for the shocking, stabbing murder of Australian travel agent Michelle Smith. Although police have numerous images and descriptions of the pair, their identities remain unknown, police confirmed today.

Following a re-enactment of the crime near the Kata Thani Hotel yesterday, police said arrest warrants for the two assailants would be issued later in the day.

Composite sketches of both men would be among the documents submitted in the warrant request.

Such is the importance of the case that it is being personally overseen by deputy national police chief Pansiri Prapawat, with the assistance of Region 8 Commissioner Lt Gen Santi Pensute.

“Based on witnesses’ statements, both suspects are about 20-25 years old and 170cm tall,” Lt Gen Pansiri said.

Police are also in possession of CCTV images of the attack as it took place, it has been revealed.

The offer of a 300,000 baht reward for information leading to the arrest of the culprits remains in effect.

Phuket Provincial Police Commander Chonasit Wattanavrangkul this afternoon denied that investigators know the names of the two attackers, as has been reported in some media.

There was no new information to report over the last 24 hours, he said.

National Police Advisor Gen Chatchai Potranan yesterday appealed to the Phuket public for help in finding the attackers, who were aboard a blue Honda Dream motorbike when they struck the two Australians.

“We need the cooperation from the public in gathering the information necessary to identify these two men. Every Phuket resident is considered a host to welcome tourists; we cannot allow these two criminals to ruin the image of the province,” he said.

Police are also searching for some 30 registered motorbikes matching the description of that used by the attackers, based on witness testimony and CCTV images, police said.

To see how news of the killing and its effect on the local tourism industry in being presented to the Australian public, click here.

Bt300,000 reward for info leading to killers of Aussie tourist in Phuket