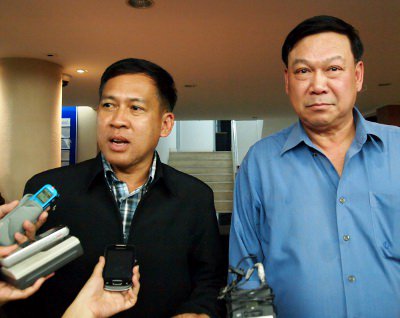 PHUKET: A 300,000 baht reward was offered yesterday for any information leading to the arrest of the snatch thieves that murdered Australian Michelle Smith earlier this week.

“This incident is a safety wake-up call for residents and tourists alike,” said Lt Gen Santi.

After watching the footage of the two men attempting to rob the 60-year-old woman and her friend, Lt Gen Santi felt confident that the men were not more than 25 years old.

“From all the evidence we have, I am 70 per cent sure that we will be able to arrest these killers. I can’t be 100 per cent sure, because the other 30 per cent involves several factors including luck,” he said.

“The two bag-snatch killers may have wandered the Kata area searching for a victim. They would then use a knife to cut the bag away from the target. Unfortunately, the two Australian tourists tried to fight back – so the attackers turned the knife on them,” he explained.

“I believe the two snatchers are locals; not part of a larger gang. I’m confident that these men will be arrested,” he added.

Also during the meeting, it was revealed that Prime Minister Yingluck Shinawatra was paying special attention to the issue of tourist safety measures for Phuket.

“She is going to consider a special budget for Phuket to install more, better-quality CCTV cameras in tourist areas,” said Lt Gen Santi.

The CCTV cameras would be able to produce high-resolution images that could be used as evidence in future cases, explained Lt Gen Santi.

Naming Phuket as the premier tourist destination in Thailand, he said safety must always be the province’s top priority. However, he was worried that the ongoing rise in population, as well as the increase in tourists, was too much for the current number of police on the island.

“Deputy Prime Minister Chalerm Yubamrung has just called a meeting regarding improved safety measures and installation of CCTV camera for Thailand’s top tourist destination. I think Phuket will be the first province to get such a budget,” Lt Gen Santi said.