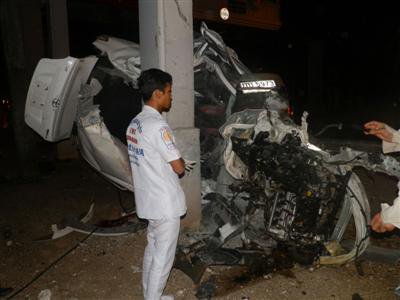 PHUKET: A Phuket man was killed instantly this morning when his car slammed full force into a pedestrian overpass on Thepkrasattri Road in Thalang District.

Thalang Police were informed of the latest tragedy on Phuket’s deadliest road at 2:20am.

There they found the twisted wreckage of a white Toyota Vios against a concrete support pillar.

The driver, 34-year-old Somkid Saeleo, died instantly of massive head trauma and other injuries, including multiple compound fractures to his left leg.

A friend of Mr Somkid told police at the scene that the deceased was an employee of Pakco International Company, a water treatment firm with offices near Phuket International Airport.

He had attended a friend’s wedding in Baan Lipon earlier that evening, leaving at about 10pm for an unspecified destination Phuket Town.

The accident occurred as he was returning to his home in Thalang about four hours later.

Based on the damage to the vehicle, police presume the late Mr Somkid fell asleep at the wheel while driving at very high speed.

It was the second major accident at the pedestrian footbridge this year, following a high-speed crash of a pickup truck there in April.

In that case the driver was far more fortunate, crawling from the wreckage with only minor injuries.