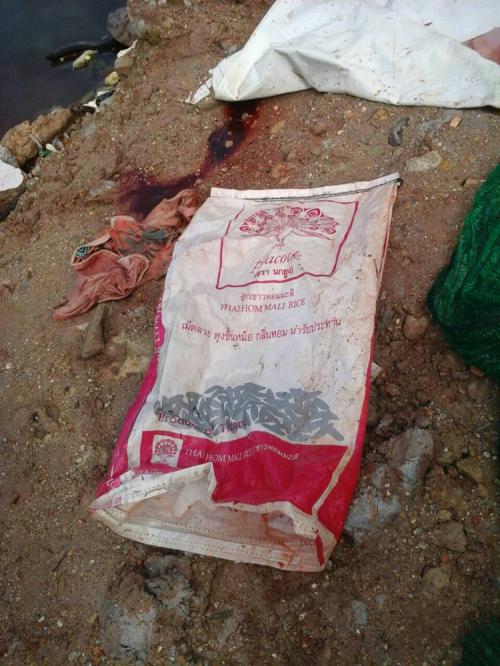 PHUKET: Police are looking to identify a man whose body was found in a lagoon behind the Patong Municipality offices early yesterday morning.

The man’s throat had been slashed and his torso had been stabbed at least 17 times, reported officers at the scene (map here).

“The body was found at 8am by local tuk-tuk driver Pattanapong Sombat, 36,” Maj Weerapong Raktito of the Patong Police told the Phuket Gazette.

“He spotted the body when he parked his vehicle by the pond after work,” he added.

The victim was 20 to 35 years old, about 160cm tall and had dark skin and dark features, Maj Weerapong said.

“He also had multiple stab wounds in his chest and back, and deep lacerations under his right arm,” Maj Weerapong added.

By the banks of the pond, officers found two empty rice sacks and a blood-soaked t-shirt.

“The man may have been murdered elsewhere and his body dumped in the pond,” Patong Police Superintendent Chiraphat Pochanaphan told the Gazette.

Col Chiraphat ordered police to launch a widespread effort to identify the man.

“I want you to check every construction camp and hotel in the area to see if any persons are missing,” he told his officers.

“If any people believe they know the identity of the victim, please contact the Patong Police at 076-342720,” Col Chiraphat said.

The body is being kept at the Patong Hospital morgue, where people may come forward and identify it, he added.