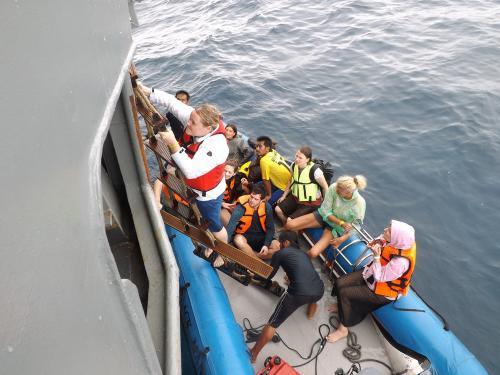 PHUKET: The Royal Thai Navy has warned all tour operators to obey orders to stay in port during dangerous weather conditions following navy ships being dispatched to rescue tourists stranded at Koh Racha and the Similan Islands over the weekend.

“If the ports are ordered to close due to the weather, please do not launch your vessels. We understand it is your business, but please keep in mind that you are risking people lives at sea,” cautioned Capt Thammawat Malaisukkarin, Director of Naval Civil Affairs at the Third Area Command.

The Third Area Command, based on Phuket’s Cape Panwa, deployed two patrol boats to recover tourists at the popular day-trip sites after strong waves made it impossible for tour vessels to retrieve their passengers from shore.

The HTMS Sriracha was dispatched to recover 157 tourists from Koh Racha Yai, about 25km south of Phuket, on Saturday.

“The Sriracha safely returned to Phuket with 157 tourists from China, Korea, Thailand, Germany and the UK at 8pm on Saturday,” Capt Thammawat told the Phuket Gazette.

HTMS Pattani, which is stationed at the Navy base in Tab Lamu, Phang Nga, was sent to rescue 87 tourists from the Similans yesterday.

“The tourists had been stranded there since Saturday night,” Capt Thammawat said.

“They were all brought safely back to the Tab Lamu Navy base at about 11am yesterday,” he confirmed.